WHAT WITH OUR neighbor, um, neighbour, to the north offering friendship, solace and a border sans a multi-billion-dollar wall, it might be timely to share information about that country. Some would say “I know more about the Dominion of Canada than any human being on Earth,” but I confess my own firsthand knowledge is spotty.

Fortunately, though, I have my trusty Baedeker’s Canada, 1894. And, as I’ve noted earlier, something worth seeing back then is all the more worthy today.

The Dominion of Canada, with Newfoundland and an Excursion to Alaska. Handbook for Travellers,

Plus, the Baedeker’s puts in perspective the pleasant and productive activities I’ve had in Quebec in the east, the Yukon Territory and British Columbia in the west, and Ontario in the middle.

Ottawa in 1894. This and the other city map from Baedeker’s Canada.

As noted by Baedeker’s, “In 1858 Queen Victoria put an end to the conflicting claims of Montreal and Quebec, Kingston and Toronto, by selecting Ottawa as the official capital of the Dominion of Canada.” The town prospered, “its population rising from 14,669 in 1861… to 44,154 in 1891. The inhabitants are divided nearly equally into the French and British races and the Protestant and Roman Catholic faiths.”

Ottawa restaurants cited in the Baedeker’s include Bodega and Queen’s, both on Elgin St. and the latter described as “unpretending, D. 25 c.”

No doubt. How much pretending could one do for a quarter, even in 1894?

Notes the guide: “British and American silver coins are readily circulated throughout the Dominion at a depreciation of 20 per cent… and travellers should be on their guard against accepting American silver coins at par value. Bank of England notes are usually taken at their full value in the larger cities, but United States paper is often refused.”

The Yukon got short shrift in my Baedeker’s because the Klondike Gold Rush didn’t occur until two years after the guidebook’s publication. This Gold Rush is important because it brought an estimated 100,000 prospectors, including Jack London, north from the largely petered-out California gold fields. In 1898, the Dominion of Canada split off the western portion of its Northwest Territories into the Yukon Territory.

I am particularly well connected in the YT, owing to a 2007 adventure in which I co-drove a Toyota FCHV fuel-cell car 2300 miles from Fairbanks to Vancouver. Our first night in Canada was spent at Buckshot Betty’s, just over the Alaska/Yukon line in Beaver. Try Betty’s Yukon Burger; it’s great.

Toward the other end of Canada, Baedeker’s notes, and I agree, that the city of Quebec is “perhaps the most picturesque city in North America, appealing at once to the most blasé tourist by the striking boldness of its site, the romance of its history, and the extraordinary contrast of its old-world appearance and population with the new world around it.”

Quebec’s Chateau Frontenac, established by the Canadian Pacific Railway in 1893. 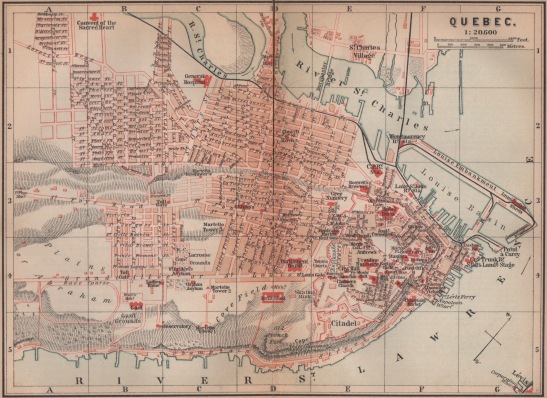 The city of Quebec. The Frontenac is at “a,” located up the hill from the Champlain Market.

The Baedeker’s mentions the city’s Lower Town, where I bought my mom a rosary from a shop run by a dissident cult of Catholics who had their own Canadian pope, Gregory XVII. In fact, it turns out there were two other alternative-fact Pope Gregory XVIIs at the time, one in Spain and the other in Italy. Out of deference to mom’s Roman Catholic orthodoxy—and to Pope John Paul II—I never did tell her the complete story. ds