SAGA OF THE SUNDSTEDT-HANNEVIG “SUNRISE”

IN THE SPRING of 1919, a dozen aeronautical teams declared their intentions of flying across the Atlantic. This was in quest of Lord Northcliffe’s Daily Mail newspaper prize of £10,000, $50,000 in U.S. currency of the day, more than $690,000 in today’s dollars. The Sundstedt-Hannevig seaplane was one of the entries.

The Sundstedt-Hannevig Sunrise seaplane, 1919, with Captain Sundstedt at the portside hatch. Image from aerofiles.com. Below and images following, my GMax/Microsoft Flight Simulator models. 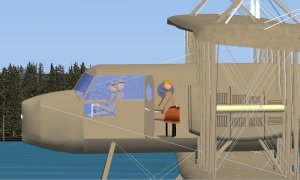 Hugo Sundstedt was a Swedish aero pioneer who had taken out his first papers for U.S. citizenship. A partnership with Norwegian ship magnate Christoffer Honnevig provided the funding to have New Jersey’s Witteman-Lewis Aircraft Company fabricate their entry for the Daily Mail competition.

In March 1, 1919, Scientific American magazine published “Airplanes for the Transatlantic Flight,” noting that “many signs point to the successful accomplishment of the feat within the next few months.” The Sundstedt-Hannevig Sunrise was the article’s first example, “at present riding on waters of Newark Bay, off the southern end of Bayonne, N.J.”

The Sundstedt-Hannevig seaplane at rest.

The Sunrise was a huge aircraft for its time, its upper wing spanning 100 ft. However, its empty weight was 7000 lbs., less than half the 15,874 lbs. of the comparably sized U.S. Navy-Curtiss NC-4. Fully loaded with fuel and crew, the contrast was even more remarkable, approximately 13,000 versus 28,000 lbs.

The NC-4 made the first aerial transatlantic crossing, from Newfoundland to the Azores, then Portugal and on to England, on May 8 – 30, 1919.

Though not explicitly critiquing the NC-4, Scientific American observes of the Sunrise, “It has exceptionally graceful lines as compared to the squatty appearance of similar sized machines of the flying-boat type.” Of Sundstedt’s design, the article cites “certain important improvements, such as cutting down the head-resistance to a minimum and cutting down the weight all around. For instance, his pontoons, each containing 32 compartments, are made of the lightest wood and weigh surprisingly little.” In fact, they were fabricated of linen-covered balsa.

Light weight translated into requiring only modest power. The Sunrise had two six-cylinder Hall-Scott engines, each rated at 220 hp. Noted Scientific American, “Most machines of equivalent size are equipped with two engines of the Liberty or Rolls-Royce type, delivering some 800 or 900 horse-power as compared with his 440 horse-power.” Indeed, the NC-4 had four 400-hp Liberty V-12s and carried 1891 gal. of fuel, more than 11,000 lbs. of it.

Smaller engines consumed less fuel. The Sunrise carried a single 750-gal. tank of gasoline (and 100 gal. of oil). Sundstadt figured this was sufficient for 20 – 22 hours of Sunrise flight. At the craft’s calculated cruising speed of a modest 80 mph, this gave the aircraft a range of 1600 – 1760 miles.

This sounds risky indeed, what with the 1700 miles of Atlantic separating St. John’s, Newfoundland, and Queenstown, Ireland. On the other hand, Sundstedt was confident (as were others attempting the west-to-east crossing) in picking up significant speed from the 50- to 75-mph tailwinds expected along this northern passage.

In retrospective analysis, the Daily Mail-winning Vickers Vimy following the same route covered 1890 miles in 15 hours 57 minutes, an average of 110 mph. A typical Vimy had a maximum speed of 100 mph. 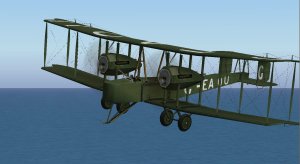 The Alcock and Brown Vickers Vimy crossed the Atlantic non-stop and won the Daily Mail £10,000 on June 14 – 15, 1919, just a few weeks after the NC-4’s achievement. Image of Microsoft Flight Simulator model.

So why wasn’t the Sundstedt-Hannevig Sunrise successful?

As Scientific American noted, on March 1, 1919, the Sunrise was riding in Newark Bay, ready for its flight testing and trip to Newfoundland to begin its Atlantic crossing. As recounted in earlyaviators.com, the Sunrise had an all-American christening: A bottle of domestic fizzy was wielded by an American actress, Erna Steinway.

Upon launch, the craft’s engines were incorrectly set at differing rpm; the Sunrise drifted into a small landing dock and damaged a wing. On her relaunch several days later, her engines failed to fire up and, once again, she drifted around Newark Bay. Noted earlyaviator.com: “The plane was towed back and the chilled crew hastened to the warm rooms of the Puvonia Yacht Club, which volunteered accommodations for the Captain and the plane.”

Sundstedt took things in stride: “These things always happen when a new plane is tried out. They are flea bites. I am in no hurry to get started, except that I must start before anyone else does.”

However, as Flying magazine reported in May 1919 (with less than complete accuracy): “Sunset [sic] Seaplane Damaged. …Commander Seversky banked the machine while landing. It went into a sideslip, and the pilot lacked altitude to recover. … Lieut. Procofieff-Seversky, who had consented to take the plane across the Atlantic, was up about 300 feet when the accident occurred.”

The report continues, “Captain Sundstedt said the accident would eliminate his machine from the trans-Atlantic contest. ‘It will require at least a month to construct new pontoons,’ he said, ‘and by that time some of the present entries undoubtedly will have made the flight.’ ” How right he was.

Seversky? Could this be Alexander Nikolaievich Prokofiev de Seversky, Russian-American aviation pioneer?? Jane’s All the World’s Aircraft 1913 lists Seversky-Prokofieff, N. as having Russian Aero Club Certificate No. 47. On the other hand, Terry Gwynn-Jones’s The air racers: Aviation’s golden era, 1909-1936

pins the Sundstedt-Hanniveg crash on an “inexperienced Russian, Commander Czenski.” There’s no listing of Czenski in Janes; but Gwynn-Jones got Sunrise right. ds

2 comments on “SAGA OF THE SUNDSTEDT-HANNEVIG “SUNRISE””