WILL THE REAL BAYREUTH PLEASE STAND OUT

THE WORD “BAYREUTH” conjures up composer Richard Wagner, Der Ring des Nibelungen and the Richard-Wagner-Festspielhaus, his opera house built in 1876. Or so I thought until I came upon the following photo and its accompanying text.

“Bayreuth, Bavaria. The opera house by G. and C. Galli Bibiena, built 1744 – 1748.” Caption and image from A volume of Places which have delighted, intrigued and intimidated Men, Hawthorn Books, 1957.

As cited in Places, “Bayreuth owes its historical quality and character to two people in particular: the Margravine Wilhelmine, who was the talented and favourite sister of Frederick the Great of Prussia; and less promisingly to Richard Wagner.” 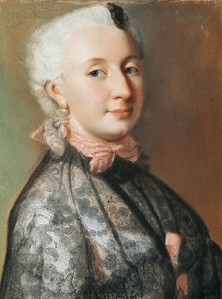 Princess Friederike Sophie Wilhelmine, the Margravine Wilhelmine, 1709 – 1758, sister of Frederick the Great, an angel of the Age of Enlightenment. A Margravine is the wife of a Margrave; he’s higher than a Graf/Count, lower than a Herzog/Duke. Portrait by Jean-Étienne Litoard, 1745.

From Places: “The Margravine… inspired a minor renaissance in building and the arts in Bayreuth…. For her in 1748 was built the opera house, which is one of the most perfect in the world, decorated inside by the most famous theatre architect of the day, Guiseppe Galli Bibiena, and his son, most perfectly evoking the delicacy and elegance of another age.”

In fact, the place might be thought a trifle baroque for modern taste. However, it can be noted the Margravine commissioned her opera house fair and square.

By contrast, Wagner took plans, without permission, from architect Gottfried Semper, even though Semper also designed a baton for the composer. What’s more, years before, they had been cohorts in the Dresden May 1849 Uprising that got them both in a whole lot of trouble.

In an 1852 letter to a friend, Semper lamented, “What must I have done in 48, that one persecutes me forever? One single barricade did I construct—it held, because it was practical, and as it was practical, it was beautiful.”

I admire his aesthetic view of engineering.

By the 1860s, Semper was teaching architecture in Zurich. At the request of Bavaria’s King Ludwig II (the Mad King of Neuschwanstein fame), Semper worked from 1864 to 1866 on an opera theater in Munich to be dedicated to Wagner. The deal fell through, but Wagner stole many of its features for his Bayreuth Festspielhaus that was begun in 1872.

And what a Festspielhaus it is!

The hall has continental seating, its audience arranged in a single steeply-angled wedge; there are no tiers, galleries nor boxes. The Festspielhaus seats 1925 people, on the smallish side of the world’s opera houses. Milan’s La Scala, opened in 1778, seats 2030 people, Los Angeles Opera’s Dorothy Chandler Pavilion, opened in 1964, seats 3156; the Metropolitan Opera’s 1966 home in Lincoln Center, seats 4000, the largest in the world.

Unique among opera houses is a hooded orchestra pit, completely invisible to the audience. Wagner wanted no distracting motions of conductor or musicians to interfere with concentration of his onstage drama. It was a trifling concern to him that the conductor had no direct interaction with the singers; modern video equipment alleviates this somewhat. Reverberations make synchronization challenging.

The conductor and orchestra are completely hidden from Bayreuth opera-goers. Image by Friera.

Celebrating the laying of its foundation stone on May 22, 1872, Wagner included within a capsule “some lines that I myself had composed.” It must have been a sizable capsule, because his description of Festspielhaus attributes runs almost 5000 words, ending in “May it stand there on the delightful hill outside Bayreuth.”

It’s almost as long as one of those Ring des Nibelungen soliloquies where a character says, “Let me tell you how we got into this fine kettle of fish.” ds

This entry was posted on March 27, 2016 by simanaitissays in Just Trippin' and tagged "A Volume of Places Which Have Delighted Intrigued and Intimidated Men", Bayreuth Bavaria, Richard Wagner, Richard-Wagner-Festspielhaus, the Margravine Wilhelmine.