ADRIENNE BOLLAND—QUEEN OF THE ANDES

IN LADY MARY Crawley’s defending 1920s women’s lib, she mentions that Adrienne Bolland had flown the Andes. [Correction, February 6, 2016: It was actually her sister Edith, prior to her London magazine editing.] Despite my enthusiasm for early aviation, this was news to me. Who was Adrienne Bolland? And what about this Andes flight? 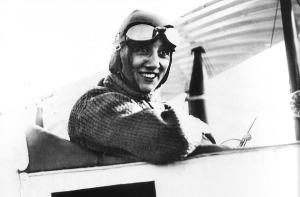 From childhood, Adrienne was a brat. As a young woman, she was enamored with partying, gaming and living large. Aviation changed her life, though only when aloft; as she said later, “I became a different person in an airplane. I felt small, humble. Because, the truth is, on the ground I was totally insufferable.”

Adrienne earned her pilot license in 1920, age 24, the 13th Frenchwoman to do so. A typo on her license added a second “l” to Boland, and she kept it.

Directly, Adrienne got a job with Réne Caudron, whose company, founded in 1908, was one of France’s first aircraft manufacturers. She was to work with Caudron for three years, at which time his new wife suggested Adrienne’s talents, and irascibility, were better employed elsewhere. 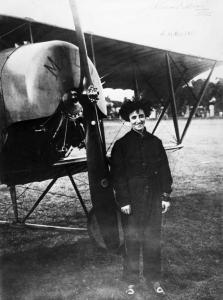 Bolland and a Caudron G.3. Image from thisdayinaviation.com.

While there, though, Bolland made aviation history. Initially, she proved her bravado by looping the loop with one of Caudron’s G.3 WWI observation planes. He then gave her a job of promoting his aircraft. Bolland’s first assignment: Fly a G.3 across La Manche (the English Channel to those on the Brit side).

On August 25, 1920, she flew the channel, the second woman to accomplish this. (Harriet Quimby was the first, in 1912.) Adrienne partied the evening before and arrived late for takeoff. When newspapers reported her lost as sea, she responded, “I may have drowned last night, but not in water!” 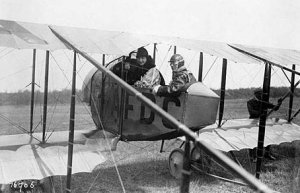 Adrienne in her G.3. In the front seat, author Louise Faure-Favier. Image from The Pioneers Hargrave.]

Caudron’s next assignment was to have Bolland peddle his G.3s in Argentina. On the boat in 1921 with two crated G.3s aboard, Adrienne concocted the idea of flying over the Andes. (Argentine Army Lieutenant Luis Cenobio Candelaria was the only other pilot to have done so, in 1918.)

Adrienne telegraphed Caudron with a request for a suitable aircraft; his response: “Take decision yourself. Could not send another plane.” So Bolland planned the flight with the G.3. This aircraft was of the spit, wire and strut variety when introduced in 1913. It was decidedly not state of the art in 1921.

In her hotel prior to the flight, Adrienne was accosted by a Brazilian woman who insisted on seeing her. “Listen to me,” Adrienne told her, “I light a cigarette. The time that I smoke, tell me what you have to say. Understood?”

The women, who later claimed to be relating a prophecy from a medium, told her, “There will be a lake. To you, it will have the shape and color of an oyster. You will want to turn right…. But it is important not to turn right…. Do not forget!” The woman told her to go left and head for a mountain shaped like an overturned chair. 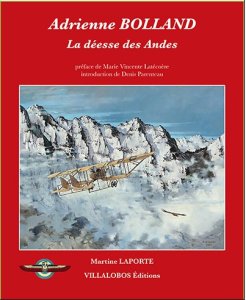 Tempted to follow a valley to the right, sure enough Adrienne encountered an oyster-shaped lake—and she banked instead toward a mountain resembling an overturned chair. An updraft got her over the mountain face and, on the other side were the Chilean plains leading to her destination.

“Make whatever you will of it,” Bolland said later, “But you have to admit that it takes some effort not to believe.”

As she neared the airport in Santiago, Adrienne was almost blinded by tiny pinpoints of light. On final approach, she realized this was sunlight glittering off the brass band awaiting her arrival. 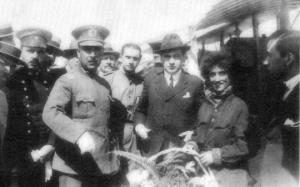 Adrienne is met in Santiago, Chile, April 1, 1921. Image from thisdayinaviation.com.

Exhausted, frozen and bloody from four hours of altitude sickness, Adrienne was offered champagne but preferred hot coffee. Later, she fell asleep in her pajamas after being divested of outer layers of leather jacket and flight suit stuffed with newspapers for warmth. General Contreras of the Santiago Flying School put her to bed, Bolland recalling, “But, take note, as a gentleman he is assisted by a Captain. I learn of all this only when I wake up.”

The French Consul for Chile was absent from the festivities. He said later he heard of the flight but, on April 1, he assumed it was merely a prank report.

Adrienne’s pajamas gained further fame when she was paraded through Santiago and cheered as Queen of the Andes. Later, to be feted by the President of Chile, Bolland said, “Sorry, but I have nothing to wear…. I’ll go in my pajamas.”

“We’ll make you a dress and hat,” she was told, though the couture delay made her four hours late to the reception. She apologized to the president, who laughed and said, “But I’ve seen you in your pajamas in the streets of the city! You are better than the rest in pajamas.”

Adrienne Bolland’s life continued to be anything but dull. In 1924, she was made a Chevalier de la Légion d’Honneur. In 1929, she made headlines worldwide for looping an airplane 212 times in succession. In 1930, Adrienne married fellow aviator Earnest Vinchon, after which she and her husband became active in leftist political causes. They supported French suffragists (who finally got the vote in 1945) and the Republicans of the Spanish Civil War. During World War II, both Adrienne and Earnest were part of the Resistance. Bolland died in Paris in 1975, age 79.

As legacy, there’s a school named for her in the Paris suburb of Poissy, a college in Bessieres, a square in Strasbourg and streets in France, Belgium and Chile. The French postal service issued an Adrienne Bolland stamp in 2005. And a Paris Tramway stop in the 20th arrondissement is named in her honor. 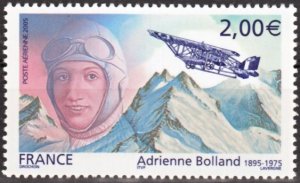