OPERA IS a high-energy art form, lots of dancing around all the while singing at the top of one’s lungs. Reflecting this, many opera stars keep their strength up with culinary matters. “Why ‘The Fat Lady’ is Fat” celebrated this with a duo of books, one published in 1941, the other in 1988. I’ve just recently uncovered operatic kitchen activities in between. 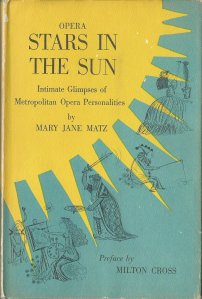 Opera Stars in the Sun acknowledges more than the performers’ culinary tastes. Other chapters tell about their family lives (soprano and actress Laurel Hurley’s background was Pennsylvania Dutch). Their homes (contralto Marian Anderson lived on a 115-acre estate, its home designed by her husband, architect Orpheus Fisher). And their hobbies (mezzo-soprano Thelma Votipka rode a motorcycle). 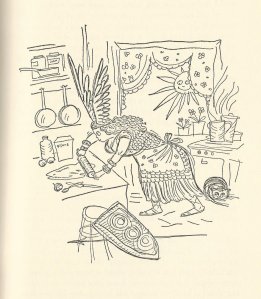 This and other images from Opera Stars in the Sun.

The chapter on “Sun Through the Kitchen Window” is also entertaining reading. Some of its culinary achievements are a bit dated (“Here, blend in three cups of rich cream…”). I’ve tried others, though, without great distress. Here’s a sampling.

Reflecting ethnicity of performers, many of the recipes are Italian. However, as basso Salvatore Baccaloni notes, “There is no such thing as Italian cuisine. Every region and city has its own style.” 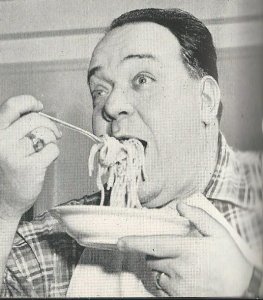 Notes author Matz, “Asked about the regional cooking of Italy, Baccaloni sets out with gusto, describing a land rich in fruits, vegetables and provocative wines.”

Speaking of provocative, I recall the acerbic view that French cuisine hides bad ingredients, whereas Italian cuisine celebrates good ones.

Tenor Charles Anthony, 1929 – 2012, was born Calogero Antonio Caruso in New Orleans. His Met career of more than 50 years was from 1954 to 2010. Anthony’s parents came from Sicily, and one of his (and my) favorites is “a real Sicilian dish, spaghetti served with a simple sauce of garlic, tomato and onion pulverized in a mortar with olive oil and browned breadcrumbs. Gourmet Anthony’s trick is to mix the boiled spaghetti with a little butter, salt, pepper and grated Parmesan just before the sauce (very hot) is poured over the pasta.”

Instead of the breadcrumbs, I used toasted pine nuts. 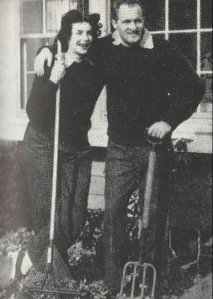 Jean Madeira shares a classic opinion: “You need four people to make salad: a spendthrift to pour in olive oil, a miser to add wine vinegar, a generous man to dispense salt and a wise man to put in the pepper.” Her favorite dressing has “one teaspoon each of dry mustard, celery seed, salt, grated onion, paprika and one clove of chopped garlic, one-half cup of sugar [!?], one cup of salad oil and one-fourth cup of vinegar.”

These days, I pass on the sugar.

A Moscona specialty was Barbounia, a Greek casserole of baked fish. It’s begun with “eight or ten small fish such as whole smelts” (or any filet of fish) in a buttered baking dish. “Moscona then adds one-half pound of quartered mushrooms which have been sautéed in two tablespoons of butter and salted slightly, then simmered slowly with one-half cup of white wine—very dry, if possible.” Then bake the casserole 15 minutes in a moderate oven. Finish it with one-half cup of bread crumbs, a dash of salt and pepper, the topping briefly browned under a broiler.

When it’s on the menu, I get my Barbounia take-away from Papa Cristo’s.