IN A MUSEUM… NOT A LONG TIME AGO… NOT FAR, FAR AWAY

THE SEVENTH episode of Star Wars is more than a year away. (It opens in the U.S. on December 18, 2015.) However, there’s already a 1:31 teaser of The Force Awakens (http://goo.gl/vaO8yi) and an IMDb listing of this flick (http://goo.gl/jDPNMn), each giving some indication of the continuation of this space opera.

For those who just can’t wait, I offer a review of an equally satisfying book, Star Wars: Where Science Meets Imagination.

Star Wars: Where Science Meets Imagination published by National Geographic, in association with Lucasbooks and the Museum of Science, Boston, edited by Ed Rodley, 2005.

The book served as the catalog of the museum exhibit of the same name. The exhibit opened October 19, 2005, at the Museum of Science, Boston, followed by an eight-year international tour (http://www.mos.org/star-wars). Maybe you were fortunate enough to visit it in Boston; Los Angeles; Chicago; Minneapolis; Sydney or Melbourne, Australia; or 14 other cities.

The exhibit and its catalog build on the technology behind the Star Wars series, with essays contributed by scientists, technologists, academics as well as those in the business of transforming this magic into the screen. There are two parts: Getting Around, the Future of Transportation; and Robots and People.

Most appropriately, the catalog’s introduction is written by Anthony Daniels, whom you may know better as C-3PO. 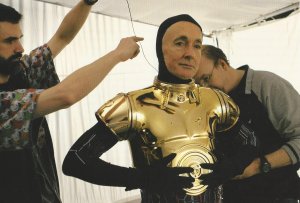 “C-3PO embodies a classic irony,” it’s noted, “He speaks countless languages but can never quite understand the motives of the humans around him.” This image of Anthony Daniels and others from Star Wars: Where Science Meets Imagination.

Robots have been around in science fiction since the 1920s, both as good guys and baddies. The catalog contains a discussion of Japan’s Astro Boy. A robot making his debut in 1951, he is unfailingly helpful, never seen as an appliance or tool, but as a friend.

Astro Boy (originally Mighty Atom) has been a Japanese science-fiction hero for more than six decades.

By contrast, Darth Vader’s blend of biological and mechanical bits enhances his aura of menace. A question is raised: “Does incorporating technology into our bodies somehow make us less human? And what counts as technology? Contact lenses?”

The section on transportation ties the rocketry of Robert Goddard (http://wp.me/p2ETap-2jp) and maglev trains with Luke Skywalker’s landspeeder and Jedi starfighters.

It’s observed that Luke Skywalker’s landspeeder has an edge over state-of-the-art transportation: “It’s powered by the force of imagination.”

The essay titled “Space, Time, and Star Wars” discusses transportation in light of Newton’s laws of motion and Einstein’s theory of general relativity. We don’t need new physics, it posits; the hyperspace of Star Wars needs only application of space that can curve, expand or contract. It’s no surprise that three dimensions are no longer sufficient.

The Millennium Falcon’s speed capability raises the temporal quandary of travelers aging at a much slower pace than those residing at either the origin or destination of the trip.

There are four galleries of images: Air and Space Vessels as they exist today; Star Wars Vessels; Implants and Prosthetics as currently configured; and Star Wars Droids and Cyborgs. The fascination of each is how today’s reality often challenges the imagined “long time ago in a galaxy far, far away.” ds

One comment on “IN A MUSEUM… NOT A LONG TIME AGO… NOT FAR, FAR AWAY”