When the U.S. government got serious about regulating the automobile in the late 1960s, Bill Fink all but single-handedly saved England’s Morgan sports car from disaster. His propane conversions were smog-regs legal. Later when loopholes closed up, Bill did a lot of the development work in fitting airbags into Morgan’s state-of-the-1936-art chassis. 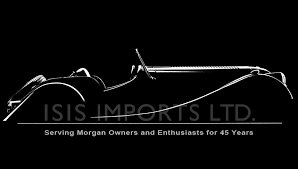 The cable car is another iconic form of San Francisco transportation. Like the Morgan sports car, it has earned mention at this website, http://wp.me/p2ETap-1Xk. Also, a cable car on the Powell/Mason Line was given a full-test analysis in R&T, April 1962. 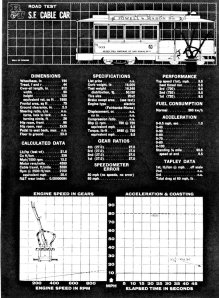 The next time you’re in San Francisco, take a Powell/Mason cable car outbound, i.e., north out of downtown, get off at Mason and Green, and walk two blocks east. You’ll come upon Caffe Sport, 574 Green St., just past Columbus St. 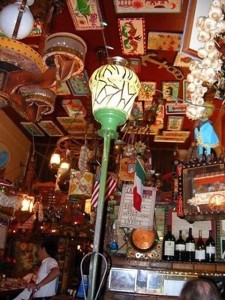 Antonio La Tona has decorated every inch of this cozy restaurant with folk art. He and his staff know their way around Sicilian cuisine too. This contrasts with traditional Italian fare in that it reflects Sicily’s eclectic heritage of Arabic, Norman and other invaders. (In the 1100s, the Norman Kingdom of Sicily outranked the Kingdom of England in wealth.) 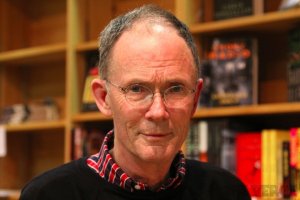 William Gibson comes to mind because of his vivid images in the Bridge trilogy, Virtual Light

1996 and All Tomorrow’s Parties

1999. These novels are sci-fi noir, parables of what could occur in a post-earthquake California with conflicts of technology, traumatic change and cyborgs.

The Bridge in his trilogy is the San Francisco-Oakland Bay Bridge, degenerated into shanty-town digs after the quake. The Bridge is also seen as symbolic of nano- and other technologies linking today’s world with tomorrow’s. 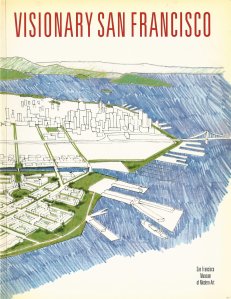 Gibson also has one of the eight essays in Visionary San Francisco, the catalog of an exhibition of the same name curated by the San Francisco Museum of Modern Art in 1990. His essay is titled “Skinner’s Room,” a first glimpse in short story form of a character to recur in the Bridge trilogy. 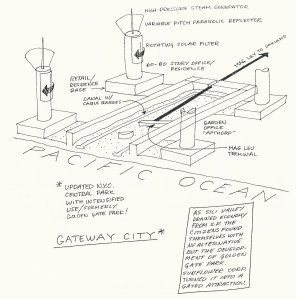 Above, Gateway City, a gated community on the site of Golden Gate Park. Below, the Bridge, a shanty-town on remnants of the San Francisco-Oakland Bay Bridge. Images by Ming Fung and Craig Hodgetts in Visionary San Francisco. 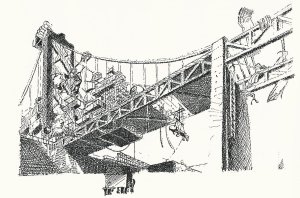 Artists Ming Fung and Craig Hodgetts contributed art for “Skinner’s Room.” At one extreme, their ink and xerography images show high-tech, self-sufficient towers, residences of the evolving rich. At the other, there’s life on the Bridge. ds