TO SOME of us, the year 1972 doesn’t seem all that long ago. On the other hand, those born that year are already in their 40s. And more than a few cars in 1972 are more than forgotten. To plenty of auto enthusiasts, they never made memory status in the first place.

The Automobile Club of Italy published this compendium annually. Typical of each, the 1972 edition has a review of the previous year’s motor racing (Jackie Stewart and his Tyrrell Ford took top honors in Formula 1) and another section on coachbuilders art (the Nuccio Bertone Countach got extensive coverage, as did the Pininfarina Ferrari PF Modulo). 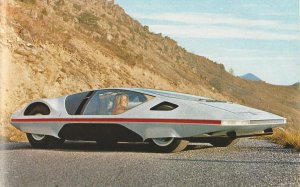 Ferrari PF Modulo, coachwork by Pininfarina. This car has recently been acquired by collector Jim Glickenhaus (http://goo.gl/4D3rhy). This and other images from World Cars 1972.

The book has summaries of the world’s auto industries, written by the likes of Paul Frère, L.J.K. Setright and Jack Yamaguchi. The remaining three-quarters of its 438 pages carry specs and photos, model by model, of the world’s cars in 1972.

And not just familiar names from major automakers. Much of the fun in perusing World Cars 1972 is in the ephemerals, the might-have-beens as well as the occasional why-evers.

Lawil was an Italian carmaker, 1967-1988, headquartered in Varzi, Pavia, in northern Italy about 60 miles south of Milan. It has been said that the world’s greatest cars are built within 100 miles of the Alps, but the Lawil may have been an exception.

I recall wife Dottie once said (about another car entirely), “No one should take poverty this seriously.”

On the other hand, World Cars 1973 shows the Lawil Log, which possessed rather more style.

I’ve long had a fondness for England’s specialized carmakers, an excellent example of which is Ginetta.

Ginetta was founded in 1958 and continues to this day as a specialized sports car manufacturer (www.ginetta.com). In World Cars 1972, the G21 is listed with 3.0-liter V-6 power of English Ford origin. Years later, wife Dottie and I visited the company’s Midlands works and drove a G33. Great cottage-industry fun.

Mohs Ostentatienne Opera Sedan, a tentative answer to a question not yet asked in 1972.

Mohs Seaplane Corp. of Verona, Wisconsin, was early in the safety market; some would argue way too early. Its wonderfully named Ostentatienne Opera Sedan had rear entry, replacing potentially vulnerable side doors with continuous side rails. Its tires were nitrogen-filled to maintain ideal inflation pressure.

Mohs offered optional Ming styled carpeting and a refrigerator, but no one bit. Only a single Ostentatienne was built.

But wait; there’s more! The Ostentatienne was restored in 2009 by Wisconsin high school students and has toured the custom car circuit. It now resides at Historic Auto Attractions, Roscoe, Illinois (www.historicautoattractions.com).

But what of major automakers?

Honda had been building power equipment and motorcycles since 1946. By 1971, it had a full line of kei cars, Japanese ultra-minis limited then to displacements of 360 cc.

Honda Vamos 4 was early in the trend of neat Japanese auto names.

One of these kei cars, the Vamos 4, was a tidy rear-drive utility vehicle powered by a 2-cylinder engine producing 30 hp at a resounding 8000 rpm.

The largest cars of Honda’s lineup in World Cars 1972 were its 77, 7 and 9 sedans and coupes, front-drive precursors of the Civic. 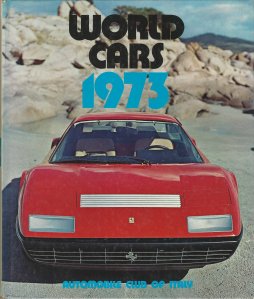 The Honda Civic made its World Cars debut in 1973, as did the production Lamborghini Countach LP 500. Since then, both companies have done just fine, thank you. ds