RAYMOND CHANDLER’S Philip Marlowe is almost as real to me as the real Sherlock Holmes.

An epitome of the hardboiled detective, Philip Marlowe has been portrayed by Humphrey Bogart, Dick Powell, Robert Montgomery and Gerald Mohr in film and on radio. Here are tidbits from my favorite Marlowe adventures in books and the movies, The Big Sleep; Farewell, My Lovely/Murder, My Sweet; The Lady in the Lake, and on SiriusXM Radio Classics.

The Big Sleep, 1946, starring Humphrey Bogart and Lauren Bacall. One of those writing the screenplay was author William Faulkner. Other details at http://goo.gl/ii7L8. An amazon.com link :The Big Sleep

Marlowe first appeared in The Big Sleep in 1939. There, several favorite Chandler themes were introduced: a resourceful sleuth, a wealthy family with a dark past (and present) and double-crosses galore.

In fact, the plot is so complex that, when queried later, even Chandler didn’t know who killed the chauffer. 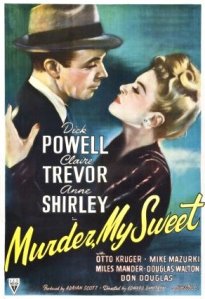 It’s anything but. There are cross-plots, ambiguities and a false identity. It’s full of great lines as well: “The house was all right too, but it wasn’t as big as Buckingham Palace.”

A 60-minute recreation of Murder, My Sweet was performed on Lux Radio Theater with Powell, Trevor and Mazurki reprising their roles. It’s heard periodically on SiriusXM Radio.

Lady in the Lake, 1947, starring Robert Montgomery, Audrey Totter and Lloyd Nolan. Details at http://goo.gl/eCWPAU. An amazon.com link: Lady in the Lake

Chandler wrote The Lady in the Lake in 1943; the movie followed four years later. The lake in question is Little Fawn Lake, about an hour from Marlowe’s usual venue of Los Angeles. Again, the plot’s complexities are rewarded by study. One character has enough aka identities to record them on a separate sheet.

The movie is noteworthy for a cinematographic experiment, employed for the first time in a major production: It’s shot entirely from Marlowe’s point of view. Other characters speak directly to the camera; the only time the sleuth is seen is in reflections.

Like Murder, My Sweet, this one had a 60-minute Lux Radio Theater presentation. With Robert Montgomery and Andrey Totter reprising their roles, it’s also played on SiriusXM Radio Classics.

SiriusXM Radio Classics also has regular broadcasts of The Adventures of Philip Marlowe with Gerald Mohr in the starring role. Mohr’s voice is a perfect fit; his Bogart-like appearance would have worked well in visual media as well.

Mohr was Marlowe in 119 radio plays, many of them in sets available from www.radiospirits.com. He was also one of several portraying Archie Goodwin, trusty assistant of Nero Wolfe, in radio dramas. (See http://wp.me/p2ETap-jn for an iconoclastic view of Wolfe.)

I close with another one-liner from Chandler’s Farewell, My Lovely. Said Marlowe of his gat, “It’s just part of my clothes. I hardly ever shoot anybody with it.” ds

This entry was posted on August 27, 2014 by simanaitissays in The Game is Afoot, Uncategorized and tagged Gerald Mohr, Murder My Sweet/Farewell My Lovely, Philip Marlowe, Raymond Chandler, SiriusXM Radio Classics, The Big Sleep, The Lady in the Lake.