IT MAY have been only a handicap race appealing to club pilots flying any old aircraft, but the King’s Cup originated by His Majesty George V in 1922 brought forth interesting aircraft with fascinating personalities at the controls.

The 1934 King’s Cup Race was a two-day affair with two rounds of cross-country eliminating heats followed by semi-final and final circuits. The races were run with organizer’s handicap, a matter of some controversy.

The website www.afleetingpeace.org celebrates Golden-Age Aviation in the British Empire, 1931 to 1939. It notes that King’s Cup competitors were primarily of two types, newcomers “mostly, it has to be said, the landed gentry” and old-timers who “were still active (if sometimes slightly bad-tempered) middle-age men.”

Harry Methuen Schofield, 1899 – 1955, director and general manager of General Aircraft Ltd, who piloted his ST-10 Monospar to victory in the 1934 King’s Cup. Image from http://www.afleetingpeace.org.

Flight-Lieutenant Harry Methuen Schofield would seem to have been in neither category. Age 35 at the time of the 1934 event, he was hardly an old-timer, though he had served with distinction late in World War I. In between being demobbed and rejoining the RAF, Schofield spent four years building church organs.

In 1927, Schofield had been one of the five pilots chosen to represent Britain in that year’s Schneider Trophy air races. His Short Crusader was one of three British designs contesting this event for seaplanes, held that year in Venice. See http://wp.me/p2ETap-1cU.

The Crusader crashed in practice, an accident later traced to cross-wiring of its aileron controls during the aircraft’s setup. Schofield was thrown clear, in a crash that ripped off his clothes and left him clad in only a shirt.

By 1934, Schofield was director and general manager of General Aircraft Ltd, a British firm established to exploit the expertise of Swiss designer Helmuth L. Stieger. Stieger’s British patent for a Mono-Spar wing allowed a cantilever design free of external bracing and, as its name makes clear, a single spar.

GAL Monospars ranged from a 1931 ST-3 prototype through a pair of ST-10s and culminating with a series of 60 ST-25s built between 1935 and 1939. All were twin-engine four/five-passenger low-wing monoplanes of particularly handsome lines. 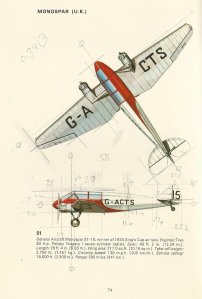 The Monospar’s airy cabin and subtly gulled wing are its defining features. Image from Airliners from 1919 to the Present Day, by Kenneth Munson, illustrated by John W. Wood et al, Peerage Books, 1975. Its dimensioning is for my Microsoft Flight Simulator model.

The ST-10 was powered by two Pobjoy Niagara seven-cylinder air-cooled radial engines. This design ran at higher rpm than conventional aircraft powerplants and featured a reduction gearing for its propeller. This oddity can be identified by a noticeable off-center location for the propeller (it’s higher than the Pobjoy centerline).

The prototype ST-10, registered G-ACTS, was GAL’s entry in the 1934 King’s Cup. Harry Schofield piloted the craft; its designer Helmuth Stieger flew as co-pilot. A brief Pathe newsreel of the event can be seen at http://goo.gl/IqSd6D.

The Monospar ST-10’s fame carries over to a Player’s Cigarette card and a Christmas tree ornament.

Not simply British understatement, but charm as well. ds