COOKBOOKS FROM other eras can be fun—and real adventures in the modern kitchen. Needless to say, I have several examples; here are three of my favorites.

The Gourmet’s Guide to Europe, by Lieut.-Col. Newman-Davis, Brentano’s, 1908.

This isn’t a cookbook per se, but The Gourmet’s Guide to Europe contains more than enough details of fin de siècle dining to qualify as an adventurous menu planner and collection of memorable aphorisms.

Of the City of Light, the Lieut.-Col. writes, “An Englishman who loved his Paris beyond any other city in the world once said to me, as we stood chatting in the Place de l’Opera, ‘If you find the central spot of this square, you may rap your stick upon it and say ‘This is the centre of the world.’ ”

In fact, Saab colleague Len Lonnegren and I once dashed through traffic to rap knuckles (having no sticks) precisely there.

Parisian taxi drivers have no sense of humor.

Newman-Davis is less enamored of Italian cuisine than French, though he grants high points. “An Italian gentleman never eats salad when traveling in foreign countries, for his palate, used to the finest oil, revolts against the liquid fit only for the lubrication of machinery he so often is offered in Germany, England, and France.”

“… and, on the hills about the Lake of Orta most of the fruit we grow in hot-houses ripen luxuriously in the open air.” See http://wp.me/p2ETap-IH for my similar appreciation of Lago d’Orta.

Of a Florence haunt known for its reveling, red and white wine “and the most indifferent cigarettes,” Newman-Davis writes, “This is hardly a place at which ladies would enjoy themselves, and still less should they be taken to Paoli’s—where the young Florentines amuse themselves with good oysters and bad company until the small hours of the morning grow big.”

Chicken with Pineapple, Pollo all’ananas, is listed as Cucina Cinese and turns out to be quite the tasty recipe. 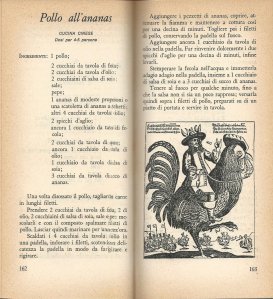 The script in the illustration accompanying Chicken with Pineapple evades me. Image from the Guida.

To begin, I looked up cucchiai da tavola as tablespoon; fecola is flour. I’ll bet you already know many of the others, olio, sale, pepe, aglio. (I love aglio.) A Chinese context gives away salsa di soia.

In its Preface, the Guida promises Un’ipotesi, uno scherzo, un’avventura: a speculation, a frolic, an adventure. It certainly delivers. 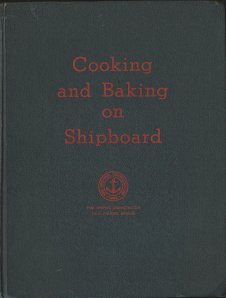 This World War II manual was “dedicated to the Cooks and Bakers of the United States Merchant Marine.” What with its standard serving size of 100, an evident knowledge of proportional arithmetic is required in applying these recipes for family use.

Beef Goulash begins with trimming and cutting 40 lbs. of beef into 1-in. cubes and chopping 4 lbs. of onions. However, it asks for only three garlic cloves, minced, and a mere 3 3/4 Tbsp. of Paprika.

I’m not about to call a Merchant Marine a wimp, but really now ….

“Of all the responsibilities shared by the Chief Steward and the Cooks who work with him, the most important by far is the good health of the crew.” Illustration from Cooking and Baking on Shipboard.

A Simmered Greens and Bacon recipe contains a footnote explaining that “approximately 40 lbs. A.P. greens will be required to yield 32 lbs. E.P.,” where A.P. stands for As Purchased; E.P., Edible Portion.

I’d double the bacon to 6 lbs., though. A bag of pinenuts too, if the last port had any.

Illustration from Cooking and Baking on Shipboard.

Merchant Marines were a brave lot and deserved the best. ds

This entry was posted on May 17, 2014 by simanaitissays in And Furthermore..., Just Trippin' and tagged Cooking and Baking on Shipboard, Guida Alla Cucina Esotica Insolita Erotica edited by E.C. Izzo, The Gourmet's Guide to Europe by Newman-Davis.