HERE’S TO THE IGGIES! 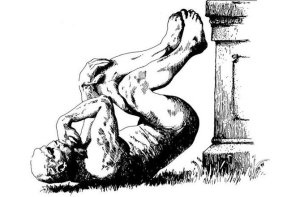 “The Stinker,” official mascot of the Ig Nobel Prizes.

The first Iggies were bestowed in 1991. Among those honored that year was J. Danforth Quayle (remember him?). Quayle’s award in Education carried the citation “consumer of time and occupier of space, for demonstrating, better than anyone else, the need for science education.” 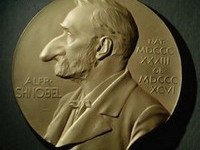 Biology, Astronomy, jointly. Marie Dacke et al, for discovering that when dung beetles get lost, they navigate their way home by looking at the Milky Way. See http://goo.gl/1956s (as also cited by Sheldon Cooper).

Safety Engineering. The late Gustano Pizzo, for inventing an electromechanical system to trap airplane hijackers. The system drops a hijacker through a trap door, seals him into a package, then drops the encapsulation through a specially-installed bomb bay. He is parachuted to earth, where police, having been alerted by radio, await him. See U.S. Patent http://goo.gl/gjSzbM.

Physics. Alberto Minetti et al, for discovering that some people would be physically capable of running across a pond—provided the pond and person were on the moon. See http://goo.gl/fOUyg.

The 2013 Ig Nobel Prize’s hammer is encased in glass.

Archaeology. Brian Crandall et al, for parboiling dead shrew, and then swallowing the shrew without chewing, and then…. No. I can’t go on. See http://goo.gl/rk7wMQ, if you must.

Peace. Alexander Lukashenko, president of Belarus, for making it illegal to applaud in public, and to the Belarus State Police, for arresting a one-armed man for applauding. Unlike the other 2013 Ig Nobel honorees, Lukashenko did not acknowledge the prize.

Probability. Bert Tolkamp et el, for two related discoveries: First, that the longer a cow has been lying down, the more likely that cow will soon stand up; and, second, that once the cow stands up, you cannot easily predict how soon that cow will lie down again. See http://goo.gl/akbUUA.

When will she get up? It depends. Image by Tom Whipple in The Times.

Public Health. Kasian Bhanganada et al, for surgical management of an epidemic of penile amputations in Thailand; in particular, for techniques recommended except when the amputated member has been partially eaten by a duck. See http://goo.gl/qPFGvE; then again, you might not want to go there. The paper, or Thailand.

There’s an edifying book on other Iggie-worthy matters.

This is Improbable: Cheese String Theory, Magnetic Chickens, and Other WTF Research, by Marc Abrahams, Oneworld Publications, 2012. It is listed at www.amazon.com and www.abebooks.com.

Marc Abrahams is editor and co-founder of Annals of Improbable Research as well as founder of the Ig Nobel Prizes; he also writes a weekly column for the British newspaper, the Guardian. Early in the book, he notes, “I collect stories about improbable things, things that make people laugh, then think.”

Let’s celebrate both of these activities. ds

This entry was posted on October 1, 2013 by simanaitissays in Sci-Tech and tagged Annals of Improbable Research, Ig Nobel Prizes, Marc Abrahams.