THE MOTORING moniker “C-Type” usually conjures an image of a 1950’s Jaguar competition car, successful in endurance racing. But two decades before this, other C-Types—these, MGs—made a name for themselves at Brooklands, Montlhéry and Le Mans. The tale is worth telling. And, there’s also a firsthand driving impression of an MG C-Type.

The 1931 C-Type evolved from founder Cecil Kimber’s enthusiasm for racing the company’s M-Type Midget. Also involved was George Eyston, famed for setting speed and endurance records with these cars.

In December 1930, Eyston took a special bodied MG, EX 120, to the Montlhéry circuit near Paris and met the goals of setting records—and also important, beating the Austins. See www.wp.me/p2ETap-pq for Austin lore.

Then he supercharged the MG’s engine and went back to Montlhéry in 1931 where EX 120 became the first car of this class to break 100 mph. The company celebrated by producing the C-Type Montlhéry MG, a racing replica available with or without the  blower. 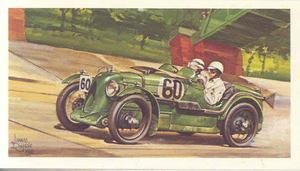 Then came the 1931 Brooklands Double Twelve, so named because this 24-hour event was split in two to appease the track’s neighbors. What’s more, race days were Friday/Saturday; none on the Sabbath.

See www.wp.me/p2ETap-sk for the modern rendition of the Brooklands Double Twelve, Sabbath included.

In those days, the race was a handicap—with serious betting as well.  Fourteen C-Types were entered, though the smart money felt their handicap was overly aggressive. One MG driver was the Earl of March (kin of Lord Charles March, of today’s Goodwood fame). At the Friday start, his odds were 10:1, with few takers.

I offer excerpts here from a contemporary article appearing in The Autocar, May 15, 1931. For the entire report, see http://goo.gl/ziCchv.

Punctually at 8 o’clock came the starting maroon. [This shot signaled each morning’s start and evening’s end.] The track is wet, streaming wet, and the number of cars [48] is far greater than at any time during practice. Birkin’s Bentley is lapping at 91 mph.

However, the MGs have finessed the handicappers. They’re lapping at no less than 69 mph, a figure which means Birkin has to lap at the fantastic speed of 103 mph to keep pace.

Shortly before eleven o’clock, the sun appears, the track is rapidly drying…. By the middle of the afternoon, the race has settled down. The Midgets’ firm lead is being maintained.

Plenty of cars have problems as they pound around the notoriously bumpy circuit. One MG borrows the cylinder head from another which has dropped out.

When the maroon is fired at eight o’clock, Midgets hold the first six places. Yet the official Press Secretary has taken a bet that no Midget will finish in the first three!

Let’s pause at the overnight break for my brief driving impression of an MG C-Type, the car a proud possession of a Rob Walter relative. See www.wp.me/p2ETap-jU  for information on Rob.

I was a reasonably tight fit within the C-Type’s 81-in. wheelbase, but leaving out the seat cushion gave me ample room.

One of only 44 C-Types, KG 1609 has a normally aspirated 746-cc sohc inline-4. It’s a genuine racing car, all of its elements resonating gently on startup. A 4-speed crash box profits from a slight pause on each upshift—and requires deft double-clutching for clean downshifts.

There’s plenty of whine from straight-cut indirect gears and final drive. The C-Type’s steering features that vaguely coupled British duo, Cam and Peg, the same pair that delight Morgan owners as well. Brakes are cable-actuated, with a little handwheel next to the shifter for au courant fiddling.

All in all, the MG C-Type is a delight.

Saturday: The flag falls, and a few seconds later comes the boom of the starting maroon. But no car springs off the mark… Any maintenance or repair must be done within the Double Twelve clock.

One team produces a complete welding rig to fix its Brooklands-required silencer. Apparently the C-Types’ rasps are considered benign. Couper makes a beautiful change to third at precisely the same spot lap after lap. By contrast one cannot hear the Midget drivers change gear at all. [Maybe they’re lapping entirely in top gear?]

Hour after hour passes. Mechanics seem to be getting all the knocks and none of the ha’pence today! At six p.m., a pair of the MGs are running dead-heat in 1st.

An Austin breaks down only a lap and a quarter from the minimum distance for an official finish. Its driver and mechanic push the car around the circuit, including the Byfleet Banking. …They return 44 minutes 15 seconds later…a lap speed of 3.45 mph.

Eight o’clock comes. The maroon is fired. The MG Midgets have won.

Where others have been replacing wings, valves, cylinder blocks, brakes, fuel tanks—every conceivable part—these five have come through unscathed and running as well at the end as they were in the first hour. Small wonder that the spectators cheer them, every one, as they come in. And even the Press Secretary did not greatly regret his lost half-crown! ds

This entry was posted on August 14, 2013 by simanaitissays in Classic Bits and tagged 1931 Brooklands Double Twelve, MG C-Type.