ENGINEERING HAS been defined as “doing a lot with a little.” But, of course, too little is not a good idea. This is the theme of To Forgive Design: Understanding Failure, its review by Philip Nobel appearing in the London Review of Books, 21 FEBRUARY 2013. The magazine recently resurfaced, and the book has joined my to-read list. Maybe you’d be interested too?

Reviewer Nobel cites his own architectural professor, Peter Galdi, for several tales. One is the story of the Manhattan Bridge, crossing the East River to connect lower Manhattan and Brooklyn.

The Manhattan Bridge, under construction, March 1909.

The Manhattan Bridge is a suspension design, one in which the “dead loads” of the structure itself and the “transient loads” of its traffic are fed through a network of steel cables to its high towers and anchorages on each bank. Though it has been standing for more than 100 years, the exact paths of these loads aren’t known—the necessary engineering mathematics didn’t exist when it was designed.

This bridge was engineered by Leon Moisseiff, another of whose designs was decidedly less successful: the Tacoma Narrows Bridge. Its failure in November 1940, just five months after its completion, was traced to a destructive vibrational mode brought about by 40-mph winds. This is one of the more documented engineering failures of all time (http://goo.gl/npxtI).

Another reason for failure cited in the London Review of Books article was rather less complex, though no less destructive. Lockheed Martin was the prime contractor with NASA’s Mars Climate Orbiter in 1999. 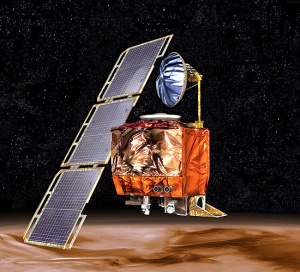 The Mars Climate Orbiter suffered from a trivial—but costly—mistake. Image from NASA.

Author Petroski lists several challenges confronting engineers. Among them are marketing (for example, the highly touted, overly quick—and deadly—luge track at the 2010 Vancouver Winter Olympics). Tight time frames can be another (one leading to an incorrect epoxy in Boston’s Big Dig 2006 ceiling failure). And, of course, there are plain old unscrupulous suppliers. 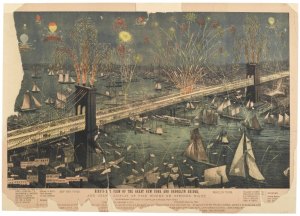 The Brooklyn Bridge, its opening celebrated in 1883. Fortunately, John Roebling designed it with a sufficient safety factor. Image from the Brooklyn Museum Collection.

John Roebling engineered the Brooklyn Bridge with a six-fold safety factor. Years later, after Roebling’s death, his son discovered that substandard wire had been substituted in the cables. Analyses proved this only diminished the safety factor to five-fold.

I’m reminded of another talented engineer, Colin Chapman, and his purported view on safety factors. Chapman would execute a new race car design, then have his drivers test it.

Innes Ireland winning the 1961 U.S. Grand Prix in a Lotus 18 (the first GP win for the team). Image from Bonhams.