ED CARPENTER, stepson of Tony George, has earned pole position for the 2013 Indianapolis 500. And, of course, Tony George is Indy Racing League founder, past president and CEO of the Indianapolis Motor Speedway and grandson of Tony Hulman, who resurrected the place after World War II.

This rich heritage evoked the memory of my own modest Indy 500 tale. It’s modest indeed because I confess I’ve always been attracted to racing that turns both left and right.

However, in the spring of 1997 I was driving across country and had scheduled a secondhand book search in Indianapolis. This activity came up dry, but the newspaper announced that tomorrow was one of the Rookie Orientation Days at the track. I considered trying to arrange a media pass, but decided instead just to play regular spectator for a few hours, then get on with my trip west. (With the exception of the Grands Prix held there later, this was my first and only other visit to The Brickyard.)

Early on Monday, May 5, parking was easy in a Georgetown Road lot across from a main gate. I bought my ticket and followed other fans through this vast venue—and to a newcomer especially, it is truly vast! Everyone sat in one grandstand directly in front of the pits. Along the way, very cordial Indiana folks sold me a program, some souvenir trinkets, a Diet Coke and a sausage sandwich for breakfast.

At this hour, the grandstand wasn’t overly crowded. There was an interesting cross section including serious Indy followers with long-lens photo gear and timer-equipped clipboards, groups of kids with their teachers on school junkets, the works.

Beginning in 1997 and lasting through 2011, engines at the Indy 500 were normally aspirated. Without turbochargers tempering their exhaust noise, and with the grandstand acting as amplifier, these cars were LOUD!

And even the rookies were fast. Both Vincenzo Sospiri and Kenny Bräck passed their rookie tests that day, Sospiri lapping at 211.964 mph. In 1997, Sospiri ultimately qualified 4th and finished 17th. Bräck was destined to win in 1999. 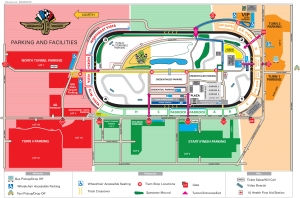 The Indianapolis Motor Speedway is an enormous place. Image from www.indy500.com.

When time came for me to get on the road, I was alone in finding my way out of the place and I got hopelessly turned around. I passed several locked gates, but couldn’t find the one through which we had all entered. The parking lot was right there across the street, but I couldn’t get to it.

Fortunately, wandering around more or less aimlessly, I encountered an official-looking guy on a golf cart.

“Is there a gate opened down that way?” I asked.

Chatting as we rode (I had wandered pretty far…), I told him it was my first visit and I had really enjoyed Indy hospitality.

“Glad you enjoyed it,” he said.

When we got to the gate, I thanked him and we shook hands. “By the way,” I said, “I’m Dennis Simanaitis; I work at Road & Track.”

This entry was posted on May 20, 2013 by simanaitissays in Just Trippin' and tagged Ed Carpenter on 2013 Indy 500 pole, Indy 500 Rookie Orientation, Tony George.