“GO BIG or stay home.” In 1932, Josef Stalin wanted to celebrate the 40th anniversary of Russian author Maksim Gorki’s first publications. So Stalin asked his favorite aircraft designer, Andrei Nikolaevich Tupolev, to build an airplane worthy of his favorite writer. (See www.wp.me/p2ETap-DW for another thing he asked of Tupolev.) Stalin also asked the Russian populace to contribute to this project.

Despite the Famine of 1932-1933, the Russian people raised almost 8 million rubles ($2 million at the time, about $33.6 million in today’s dollars). And Tupolev designed and built the ANT-20 Maksim Gorki, the era’s largest aircraft. 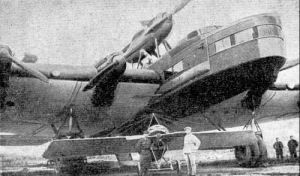 The Maksim Gorki was huge, with more than 1000 sq. ft. of floor area aboard.

Two of its 900-hp V-12 engines were mounted tractor/pusher fashion in a pod above the fuselage center. So thick were the Maksim Gorki’s wings that crewmen had standing-room access to the six engines located there.

The Maksim Gorki had two levels and was built in five sections held together with high-tensile bolts. The first section’s “downstairs” included a navigator’s seat and part of the cabin. The second held the pilots and radio operator above, together with additional passenger accommodations below. The center section had a unit with a 16-digit telephone exchange, a work area and toilets.

Details of the Maksim Gorki. Image from The Complete Encyclopedia of Flight, 1848-1939, by John Batchelor and Malcolm V. Lowe, Chartwell, 2005. Both www.amazon.com and www.abebooks.com list it.

The fourth section held a buffet, a cinema, a photo lab, a printing press and a radio station—everything needed for a flying propaganda machine. The Maksim Gorki even had a pneumatic mail system for transferring messages from one section of the aircraft to the other. Its tail section was purely structural.

A close-up of my Maksim Gorki shows a bit of Soviet Realism visible through the side window. Its source, below, is the painting “Gorki Reading to Stalin,” 1934, by Viktor Nikolaevich Govorov. 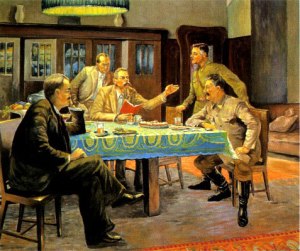 The aircraft entered service of the Maksim Gorki Propaganda Squadron on August 18, 1934. Its mission was to fly to cities, towns and villages of the Soviet Union, drop freshly printed leaflets of uplifting messages and just-taken photos, and offer music and information through its loudspeakers—known as “Golos s Nebo,” “The Voice of the Sky.”

A grateful populace admires a fictional multiplicity of ANT-20s. (Indeed, there was a second one built, the ANT-20bis.) The text reads “Long live our happy socialist motherland! Long live our beloved, the great Stalin!” Poster by Gustav Klutsis. Image from www.transpressnz.blogspot.com.

At night, its underwings had illuminated signage as well. On the ground, local dignitaries were invited to sit on benches beside the aircraft and view freshly developed movies on its big-screen cinema.

My model of the Maksim Gorki buzzes the Kremlin in Microsoft Flight Simulator’s Moscow.

The Maksim Gorki’s mission was highly successful until fate intervened. On May 18, 1935 the aircraft was part of an aerial flotilla entertaining the people of Moscow. One of the accompanying pilots, N.P. Blagin in a Polikarpov I-5 fighter, attempted aerobatics around the Maksim Gorki. He performed two rolls, then lost speed and struck the rear of the larger aircraft’s fuselage. This video appears to end with the first of these two rolls: http://goo.gl/zoynL.

After the collision, the Maksim Gorki began to disintegrate. A wing broke off, and the aircraft plummeted to the ground outside the village of Sokol, now part of Moscow.

Forty-five onboard the Maksim Gorki perished, as did N.P. Blagin and three people on the ground. All were buried with ceremony in Moscow’s Novodevichy Cemetery, where a monument memorializes the disaster. 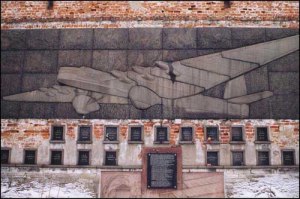 This monument to the Maksim Gorki disaster stands in Moscow’s Novodevichy Cemetery. Image by Doug Alberg.

There was controversy concerning pilot Blagin’s role. It was rumored that he intended to ram the Maksim Gorki as a statement against the communist regime. History casts doubt on this, though the term Blaginism is still used to describe a cocky disregard of authority.

Among others interred at Novodevichy Cemetery are Nikita Khrushchev (who headed a commission investigating the Maksim Gorki disaster), Boris Yeltsin—and Andrei Tupolev. ds

This entry was posted on March 14, 2013 by simanaitissays in Vintage Aero and tagged Novodevichy Cemetery Moscow, Tupolev ANT-20 Maksim Gorki.