COLLECTIONS OF cars often have interesting stories, but there’s no more intriguing one than the tale of the Schlumpf Collection. Originating as an obsession of brothers Fritz and Hans Schlumpf, the collection was in turn a clandestine shrine to their mother, a hostage in a workers’ dispute, a French Historic Monument, an object of bankruptcy and, today, the Cité de l’Automobile, the largest automobile museum in the world.

The Schlumpf brothers were Swiss nationals born in Italy (Hans, 1904; Fritz, 1906) and living in Mulhouse, France. This Alsace city was the hometown of their widowed mother, Jeanne, whom both brothers adored.

This shrine to Jeanne Schlumpf is part of the museum. Its bronze plaque reads, “We dedicate this museum to our dear mother. Her grateful sons. Hans and Fritz.” This and other images from Der Fall der Brüder Schlumpf.

Fritz, in particular, also loved automobiles and even dabbled in racing classic cars after World War II. The brothers’ success in operating wool mills gave them more than adequate wealth to build a collection, initially focused on Bugattis.

At one point, all owners listed in the Bugatti Register were sent form letters offering to buy any and all their cars. During the summer of 1960, the Schlumpfs acquired 10 Bugattis. In 1962, they added some 50 more; in spring 1963, 18 of Ettore Bugatti’s personal cars; later that year, American John Shakespeare’s entire collection of 30 more.

One of these Type 32 Bugattis finished 3rd in the 1923 French Grand Prix, where it earned the nickname, the “Tank de Tours.” This was the same race where a Voisin Laboratoire finished 5th (see www.wp.me/p2ETap-JU). What a venue of innovation!

Fritz’s reputed generosity to their mill workers was not shared by his brother Hans. This may explain why the growing collection of cars was kept secret. It’s said the brothers would invite lady friends to view the collection clandestinely and dance in their mother’s alcove while one of them played a restored Mortier organ.

Having admired the Paris street lamps illuminating the Alexandre III bridge over the Seine, Fritz had them reproduced for museum lighting—845 of them.

Alas, in the mid 1970s textile manufacturing began moving to Asia. The Schlumpfs started selling factories, and when striking workers broke into the Mulhouse works in 1977, they discovered this treasure of more than 600 cars.

Fritz and Hans hightailed it to Switzerland. The workers opened the museum to the public, and 800,000 people visited in two years. In 1978, it was classified a French Historic Monument. A year later, a bankruptcy liquidator ordered the building closed.

Fortunately, before the collection could be sold off, a conglomerate of public and private entities bought it, the buildings and land. This National Automobile Museum Association reopened the museum in 1982, but it too had its ups and downs.

In 1999, an organization called Culturalspaces was contracted to modernize the museum and its operations. The result is today’s Cité de l’Automobile (http://www.citedelautomobile.com/en/home).

But wait—there’s more. In 1981, Fritz had sued the conglomerate for a portion of its sale price. He died in 1992 before anything was settled. 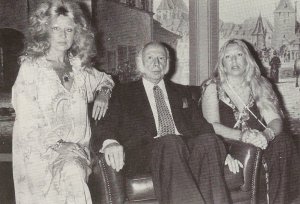 In less complex times, Fritz Schlumpf and his companion Arlette, left, with her daughter.

In 1999, a French court ruled in Fritz’s favor, returning ownership of 62 cars and awarding the balance of a 40 million franc indemnity to Arlette Schlumpf-Mass. Wikipedia says his “widow.” Der Fall der Brüder Schlumpf  (published in 1984) used the term “Lebensgefährtin,” which my Google Translate says is German for “girlfriend,” though the literal “life’s companion” may have been more like it.

And a little more. After Madame S-M died in 2008, at the age of 78, many of these cars ended up at the Mullin Automotive Museum (see www.wp.me/p2ETap-Fr).

This entry was posted on February 4, 2013 by simanaitissays in Classic Bits and tagged Cite de l'Automobile, Fritz and Hans Schlumpf, Schlumpf collection.