I’VE GOT A SONG IN MY HEAD—BUT WHERE?

That is, our music appreciation is a right-brain function; our language skills reside on the left.

So, I’ve got this song in my head, both lyrics and melody. Where does it reside?

Science, February 28, 2020, addresses this in Daniela Sammler’s “Splitting Speech and Music.” “How do listeners extract words and melodies from a single sound wave?,” she asks.

Her article and an associated technical paper by Albouy et al. offer “evidence for the biophysical basis of the long-debated, yet still unresolved, hemispherical asymmetry of speech and music perception in humans. They show that the left and right auditory regions of the brain contribute differently to the decoding of words and melodies in song.”

Methodology as a Paradigm of Science. In “Distinct Sensitivity to Spectrotemporal Modulation Supports Brain Asymmetry for Speech and Melody,” Albouy and his colleagues give a fine example of the scientific approach: recognizing existing knowledge, positing advancement of the theory, devising means of analysis, then testing whether the expanded theory is confirmed.

Background. Sammler describes how, in 1861, French anatomist Pierre Paul Broca “astounded his Parisian colleagues with the observation that speech abilities are perturbed after lesions in the left, but not right, brain hemisphere. This seminal insight not only ended the long-held view of symmetrical brain organization; it also launched the quest for asymmetries in other cognitive domains.”

Previous research has suggested that speech perception depends strongly, though not solely, on short-lived temporal modulations: for example, the “b” and “p” sound in differentiating “bear” from “pear.”

Separating the Two Perceptions. Albouy and his colleagues began with recordings of 100 carefully constructed unaccompanied vocals. To these, they applied special filters that incrementally removed either temporal details or spectral details of the song. 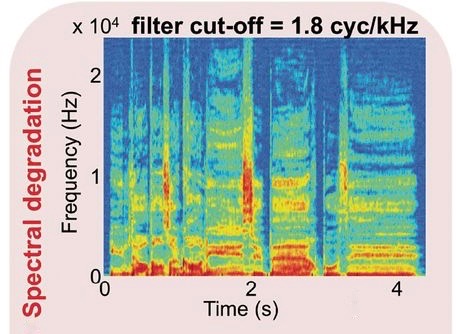 Participants listened to arrays of 100 vocals and their filtered versions.

An example of the test methodology. English-speaking participants showed different, but not dissimilar, results.

The brains of listeners were monitored by functional magnetic imaging. The resulting data were fed to a machine-learning program that identified patterns of brain activity that corollated with the words or melodies being heard by participants.

Researchers say there’s not an absolute split of one and the other. For example, as Sammler observes, “… musicians could never play in sync without perceived subtle rhythmic deviations,” which, of course, are temporal. Rather, as other research has suggested, there’s a weighted distribution of left and right auditory regions to different aspects in both domains.

Have I ever told you that Amazing Grace and The Mickey Mouse Song have interchangeable melodies? And what does this tell you about my brain? ds