WAS THE WORLD’S first consulting detective also a British agent? As Sherlock Holmes himself says, “Once you eliminate the impossible, whatever remains, no matter how improbable, must be the truth.” Here’s evidence suggesting the credentials of agent 00221B.

Intense, Yet Underplayed British Loyalty. In “The Bruce-Partington Plans,” chronicler Dr. John H. Watson notes, “Holmes declines to allow his name to go into the honours list….” Yet, “… Some weeks afterward,” Watson says, “I learned incidentally that my friend spent a day at Windsor, whence he returned with a remarkably fine emerald tie-pin.”

“When I asked him if he had bought it,” Watson continues, “he answered that it was a present from a certain gracious lady in whose interests he had once been fortunate enough to carry out a small commission.”

Holmes was intensely loyal to the Crown, but preferred to stay out of the limelight. A perfect agent proclivity.

Disguises. As detailed in “Aka Sherlock Holmes” here at SimanaitisSays, Holmes was well acquainted with working in disguise. From time to time, he was even capable of fooling his old friend Watson: In “A Scandal in Bohemia,” Watson says, “Accustomed as I was to my friend’s amazing powers in the use of disguises, I had to look three times before I was certain that it was he.”

Just the thing for undercover work. Even Bond seemingly lacked such skills of anonymity. “Bond,” he says, “James Bond,” often and openly.

Safehouses. Spies have inconspicuous locales where they can disappear at a moment’s notice. Holmes had safehouses throughout London where he could pop in, change into a disguise, then continue with an investigation.

Language Skills. As described in “Holmes the Polyglot?”, Holmes possesses excellent language skills. Evidence suggests his familiarity with German, French, Latin, American English, and perhaps Tibetan and Norwegian, helpful when he traveled to the Far East disguised as Sigerson.

By contrast, 007 seems to find himself surrounded by English speakers wherever his adventures lead him.

Physical Skills. “Holmes and Bartitsu” describes his prowess in hand-to-hand combat. Seemingly for one of a sedentary disposition, Holmes regularly and successfully mixes it up with adversaries. 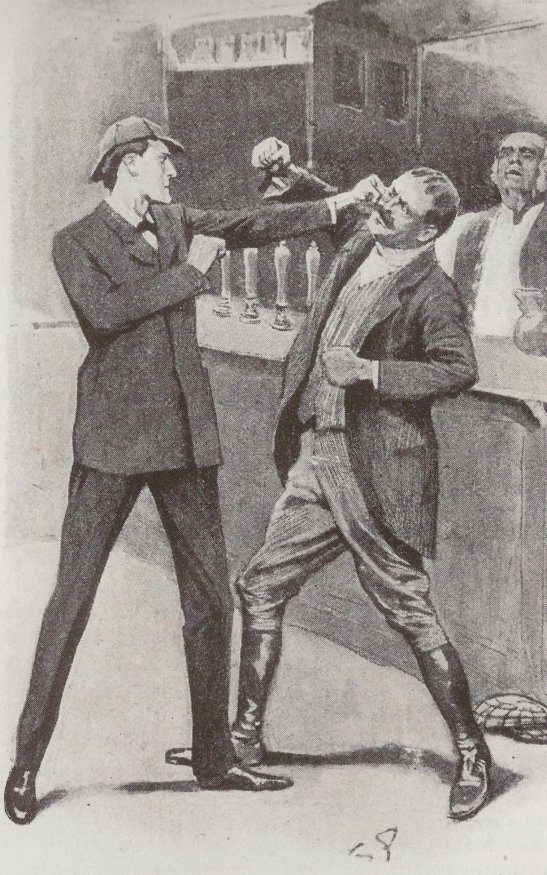 “A straight left against a slogging ruffian,” in “The Solitary Cyclist.”

In fact, Holmes seems to get beat up rather less often than 007.

Knowledge of Weaponry. If necessary, Holmes knows how to wield whatever weapon is handy: In “The Speckled Band,” Watson reports, “The instant that we heard it, Holmes sprang from the bed, struck a match, and lashed furiously with his cane at the bell-pull.”

Illustration by Sidney Paget for the Strand Magazine, February 1892.

Later, Holmes fashions a dog whip into a noose to capture the deadly swamp adder of the story’s title.

Other times, Holmes’ expertise with firearms is evident, as described in “Firearms in the Holmesian Canon”. In “The Hound of the Baskervilles,” he “emptied five barrels of his revolver into the creature’s flank.”

On a less stressful note, in “The Mulgrave Ritual,” Watson recounts how his roommate at 221B Baker Street would “adorn the opposite wall with a patriotic V.R. done in bullet pockmarks.”

Image from the International Exhibition of Sherlock Holmes, the Oregon Museum of Science and Industry; photo by Jonathan H. Liu.

There’s that loyalty to the Crown again.

Mycroft Holmes. Illustration by Sidney Paget for the Strand Magazine,September, 1893.

In “The Greek Interpreter,” Sherlock says Mycroft “has no ambitions of any kind, will receive neither honour nor title [sound familiar?], but remains the most indispensable man in the country.”

In “The Bruce-Partington Plans,” Mycroft says to Sherlock, “In all your career, you have never had so great a chance of serving your country.”

And Holmes tells Watson about Mycroft, “You would also be right in a sense if you said that occasionally he is the British Government.”

Just as Sherlock Holmes is occasionally 00221B. ds