WELL, HERE’S a pleasant surprise: the combination of an old aeroplane and Wagner’s Ring Cycle. What’s more surprising is finding a detailed article on that aeroplane from 1910. The tale of the aeronautical Valkyrie is here in Parts 1 and 2 today and tomorrow. 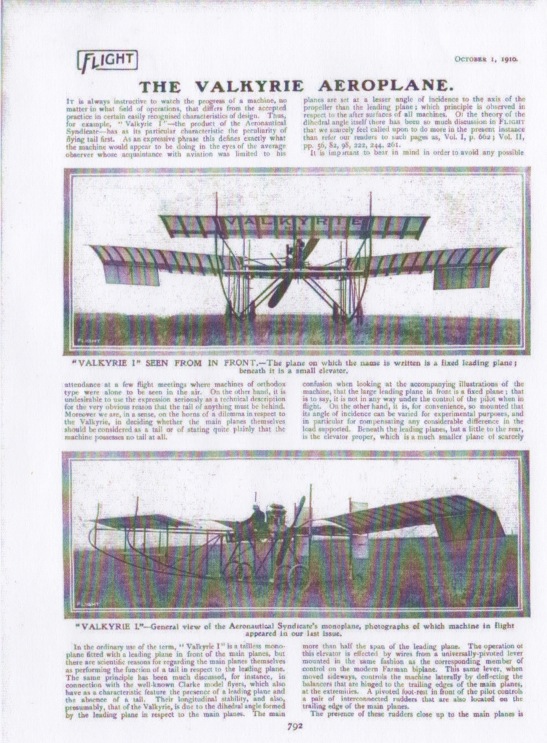 In fact, my introduction to the Valkyrie came from Pioneer Aircraft 1903-1914 – The Pocket Encyclopaedia of World Aircraft in Color,

Munson describes the Valkyrie canard monoplanes as “safe, reliable machines, if a little unorthodox.” Being a canard, with forward-mounted elevator, was old hat by 1910; the 1903 Wright Flyer had a canard layout.

On the other hand, the Valkyrie wasn’t a biplane and it didn’t depend upon wing warping for its lateral control: Its monoplane wings had ailerons, called “balancers” in the Flight article. Separating the elevator from the horizontal stabilizer was unorthodox as well.

My 1911 Valkyrie Racer, built with GMax for Microsoft Flight Simulator.

As noted in Flight magazine, “Perhaps the most important constructional feature of the machine from the point of view of detail is the use of a single-surfaced main plane, which is considerably lighter than a double-surfaced member, firstly owing to the smaller quantity of fabric and secondly owing to the lighter character of the cambered ribs.”

Horatio Barber, Valkyrie Entrepreneur. Englishman Horatio Barber, 1875–1964, had leased a railway arch in London’s Battersea to design and produce aeroplanes. In 1909, he moved to Salisbury Plain (Stonehenge country) where he established the Aeronautical Syndicate. In November 1910, Barber used his Valkyrie I to earn his British Aero Club Certificate No. 30.

Other variations of the Valkyrie followed in the next two years, including a single-seat Racer, a two-seat Valkyrie B and a three-seat Passenger Carrier Valkyrie C. In total, the Aeronautical Syndicate produced perhaps 20 examples, the last in early 1912. 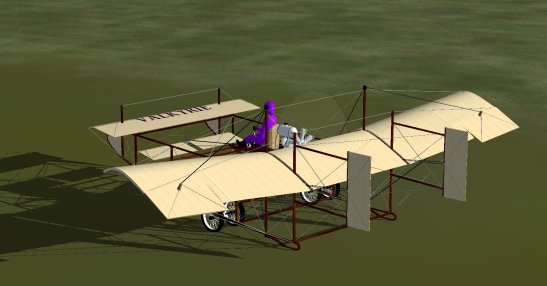 A Valkyrie Demonstration. In Pioneer Aircraft, Kenneth Munson quoted R. Dallas Brett’s History of British Aviation: “Mr. Barber… demonstrated the quick take-off of his mount by repeatedly charging at the crowd from a distance of fifty yards and pulling the machine off over their heads.”

Munson also cited, “At a meeting held at Hendon in 1911 for visiting politicians to assess the military promise of various aircraft, Barber was refused permission to demonstrates the Valkyrie.”

Whether this was related to Barber’s crowd-charging is not noted.

Tomorrow in Part 2, we’ll continue with Barber’s Valkyrie adventures and my own GMax modeling of this craft. ds