ON STRAITS AND NARROWS PART 1

THE STRAIT OF HORMUZ, so critical to the world’s oil supply, has been in the news recently. In particular, BBC News, July 26, 2019, reported that it “is at the centre of rising tensions after Iran seized a British-flagged tanker there.”

This got me thinking about Hormuz and how it compares with others of the world’s straits: the Mediterranean’s Strait of Gibraltar or Alaska’s Bering Strait, for example. In turn, this called for Internet sleuthing and, today and tomorrow, for Parts 1 and 2 of what I gleaned.

The Strait of Hormuz links Persian Gulf countries with the world’s waterways. To the strait’s north lies Iran. To its south lies the United Arab Emirates and Musandam, an Omani enclave. 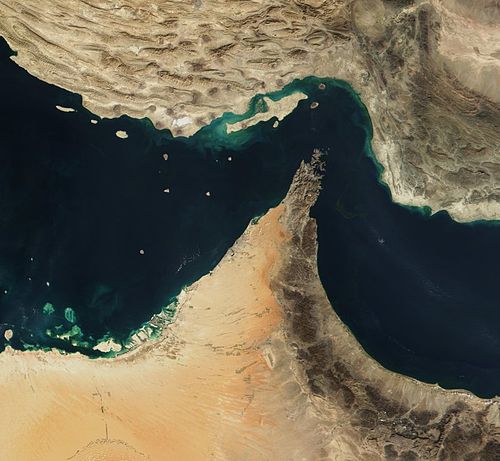 Above, a satellite view of the Hormuz Strait; below, a map showing the Persian Gulf to its west, the Caspian Sea to Iran’s north. Sources: NASA/GSFC and Google BBC, respectively. 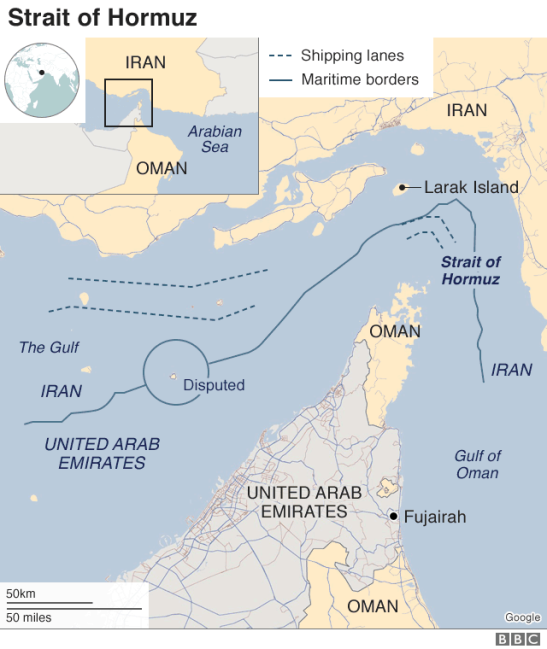 Think Nautical. Given all this seagoing action, let’s agree to think in nautical miles (equivalent to 1.15 statute miles). The Hormuz Strait is about 90 miles long, its width varying from about 52 miles to 21 miles at what’s termed its naval choke. This choke distance is internationally significant in that the United Nations recognizes a country’s watery boundaries to a 12-mile limit. 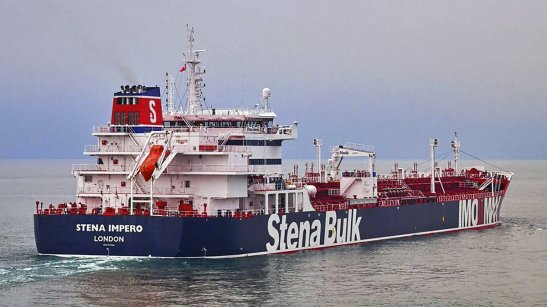 The British-flagged Stena Impero got hassled by unidentified small craft and helicopter as it passed through the Hormuz Strait. Image from npr.com, July 19, 2019.

Shipping lanes through the Hormuz Strait are two miles wide in each direction, with a two-mile-wide median. Thus, oil tankers traversing Hormuz lie in either Iranian or Omani waters—or both—for part of their journey. 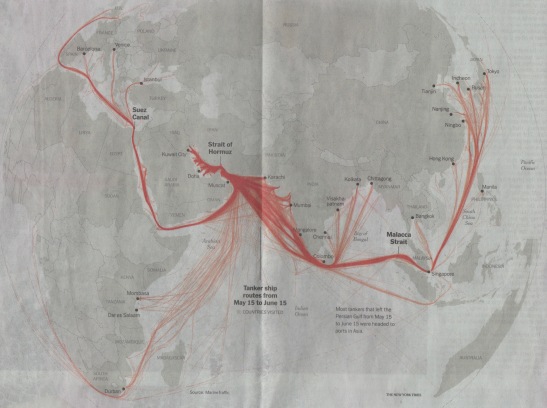 The New York Times, July 14, 2019, reports, “From May 15 to June 15, more than 1000 tanker ships traveled the strait…. But the gulf region has been recently rocked by instability, threatening the flow of oil…..”

This entry was posted on July 27, 2019 by simanaitissays in And Furthermore... and tagged "New York Times" map showing tanker routes through Hormuz Strait, BBC News: British-flagged tanker seized by Iran, naval choke: a narrow seagoing passage, Strait of Hormuz between Iran and Oman.