THE WORD “INDUCTION” has a whole bunch of meanings: Merriam-Webster starts with “the act or process of inducting (as into office),” which is sort of a definitional cop-out: What’s “inducting”?

Another M-W citation is “a preface, prologue, or introductory scene especially of an early English play.” Interesting, but bordering on the theatrically obscure.

There’s also “the act of bringing forward or adducing something (such as facts or particulars).” This one includes electrical induction of magnetized bodies, the biologic fate of embryonic cells, and even the perhaps more familiar internal-combustion idea of fuel and air entering on the first of a four-stroke process.

M-W also cites “inference of a generalized conclusion from particular instances—compare DEDUCTION sense 2a.” What a good topic for another day! Which did Sherlock Holmes employ? Deduction? Induction? Both?

Thus, assuming the equation works for k implies it also works for k+1. 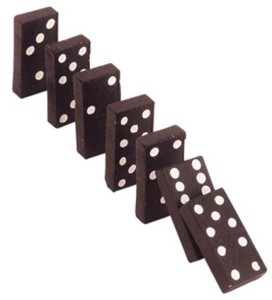 Loosely, the first domino is tipped, and the carefully aligned others all tumble.

Gauss’s Genius. There’s a charming story about the young Carl Friedrich Gauss, destined to be known as Princeps mathematicorum, loosely (and incorrectly) the Prince of Mathematicians. 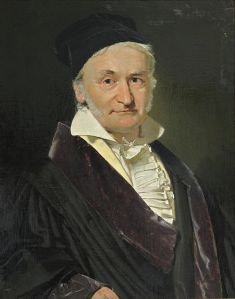 Carl Friedrich Gauss, 1777–1855, German mathematician and physicist. In fact, Princeps mathematicorum is Latin for “the foremost of mathematicians.

His elementary school teacher tasked students to compute the sum 1+2+…+100. (Unlike us, they hadn’t covered math induction yet.) Gauss baffled the teacher by quickly saying “5050.”

Here’s how he did it:

Image from The National Council of Teachers of Mathematics.

This, gentle reader, is why Gauss was Princely. ds