ILLUMINATED MANUSCRIPTS OFTEN are associated with compelling tales. For example, yesterday’s Codex Amiatinus, Part 1, set the stage: There’s a trio of medieval English monks and three commissioned illuminated manuscripts of the Vulgate Bible. Ceolfrith, one of the monks, dies en route to delivering one of these tomes as a gift to the Pope—and then this 75-lb. illuminated manuscript goes missing, more or less.

Whence the Amiatinus Moniker? Ceolfrith’s bulky gift next appeared definitively in 1036, this time in the records of the monastery of San Salvatore on Monte Amiata, in southern Tuscany (about 110 miles northwest of its intended destination). Both Langres, Burgandy (Ceolfrith’s place of dead in 716) and the San Salvatore monastery (founded in 743) were along familiar routes of pilgrimage to Rome.

In 800, Charlemagne spent some days at San Salvatore en route to Rome where Pope Leo III gave him the title of Holy Roman Emperor. Charlemagne might well have seen and venerated the Amiatinus illuminated manuscript, already recognized as a significant Christian document.

Meetings with Remarkable Manuscripts: Twelve Journeys into the Medieval World,

A Counter-Reformation Tussle and Journey. As Christopher De Hamel notes in Meetings with Remarkable Manuscripts, “Because the manuscript was (and still is) the primary witness for the text of the Latin Vulgate, it assumed great importance during the Counter-Reformation.” The Codex Amiatinus gave Rome’s Holy Mother the Church a fine comeuppance to Protestant translations of the Bible, such as Martin Luther’s. 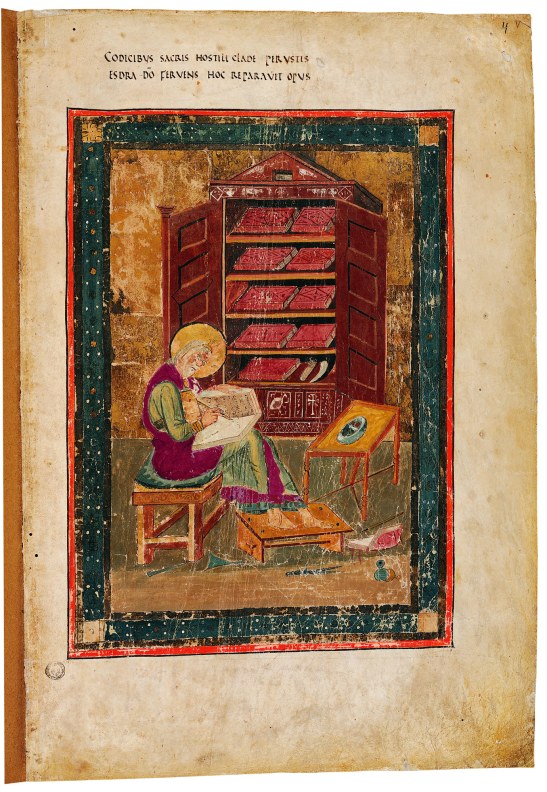 Portrait of Ezra, from folio 5r, at the start of Codex Amiatinus’ Old Testament.

In 1572, advisors of Pope Gregory XIII sent for the Codex Amiatinus, but the monastery refused to let it go. Later, Pope Sixtus V demanded it be sent, and the book traveled from San Salvatore to Rome on July 12, 1587. It resided with the Papacy until its return on January 19, 1590. Writes De Hamel, “The Sistine Vulgate based on it was published in 1590 and then revised as the monumental Clementine edition of 1592, the Catholic response to Luther, which is still in print.”

Amiatinus Ups and Downs. Caught up in Holy Roman Empire politics, the San Salvatore monastery was suppressed in 1782. Seven years later, Peter Leopold, Grand Duke of Tuscany, ordered that the book be taken from Amiata to Florence, first in a seminary and then to the Biblioteca Medicea Laurenziana, where it resides as Cod. Amiat. 1, what De Hamel calls “probably the library’s most famous manuscript.”

A Genial Italian Encounter. “My first inquiry about seeing the Codex Amiatinus,” De Hamel recalls, “was met with refusal, that deep all-encompassing sigh of infinite regret which only the Italians have perfected: It is too fragile to be moved, I was informed, and it is too precious to be handled. In Italy, however, the word ‘no’ is not necessarily a negative. It is merely a preliminary stage of discussion.”

Later, when he arrived as scheduled, “A man in jeans appeared and asked if I spoke Italian. I replied in English, then French and German—”necnon etiam Latinam,” I ventured hopefully—but he shrugged and informed me in Italian anyway (I hadn’t even said who I was) that I must have come to see the Bibbia Amiatina. I agreed, relieved.

Maiestas Domini (Christ in Majesty) with the Four Evangelists and their symbols, at the start of the Codex Amiatinus’ New Testament (fol. 796v).

A Return to its English Roots. Even in the late 1700s, the Codex Amiatinus’ Italian origin was assumed. Then, in 1854, analyses of erasures in the manuscript’s title page cast doubt on this. “Thirty years later,” De Hamel notes, “the epigrapher Giovannni Battista de Rossi (1822–1894) finally deciphered the names underneath and revealed that the manuscript had originally been dedicated to Saint Peter from one Ceolfrith, ‘abbot of the English.’ ”

“When the news broke in February 1887,” De Hamel notes, “it caused a sensation, especially in Britain.”

Following this, missing bits of the Codex Amiatinus and possibly of its two siblings have popped up in English country homes and bookshops, some of the vellum leaves having been used as wrappings for other documents. Hardly appropriate use of masterpieces produced 1300 years ago.

And Yet Other Trips. After De Hamel’s encounter with the Codex Amiatinus in researching his 2017 book, this illustrated manuscript is currently on loan to the British Library. Now finally visiting its homeland, the Codex Amiatinus is scheduled for yet more travel: back to the Biblioteca Medicea Laurenziana in Florence in February 2019.