ETYMOLOGY: TO COZEN, A COZENER

GIVEN THAT we may be entering the second half, and perhaps the end game, of Trumpery, it is not inappropriate to discuss classical terms for the personality type, in particular, the etymology of “cozener” and its related “to cozen.” These are words rich in history, with a Puritan heritage dating back to 1573.

Merriman-Webster defines the verb “to cozen” as “1. to deceive, win over, or induce to do something by artful coaxing and wheedling or shrewd trickery. 2. to gain by cozening someone.” A cozener is one who practices this deceit.

M-W says, “Some linguists have theorized that ‘cozen’ traces to the Italian noun cozzone, which means ‘horse trader.’”

Folio 8r of a 13th-century The 3rd Seal, the Black Horse of the Apocalypse; metaphorically, a cozzone. The original art resides in the British Library, London.

“It seems safe to assume,” M-W continues, “that not all of these negotiations [in horse trading] were entirely on the up-and-up. Given its etymological association with horse traders, therefore, it’s not too surprising that ‘cozen’ suggests deception and fraud.”

As an early source, M-W cites Philip Stubbes, a 16th-century Puritan pamphleteer (think blogger with a self-righteous streak). In The Anatomie of Abuses, 1583, Stubbes wrote about dealing with unscrupulous types, “Be not utterly deceived (or to speak in plainer terms, cozened at their hands).”

Occasionally, something written by a Puritan more than 400 years ago is still timely. 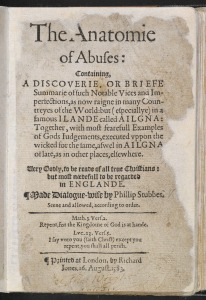 The Anatomie of Abuses, (not the ones you’re thinking of), was the most popular work of Philip Stubbes, c. 1555–c. 1610, English pamphleteer.

Stubbes was attacking his era’s manners, fashion, gambling, alcohol, and theater. He was a tad early, but probably influenced those guys grousing about Shakespeare’s plays.

M-W offers 33 synonyms for cozen, a goodly number of which have already appeared here in the SimanaitisSays Etymology for our Times: among them, bamboozle, con, deceive, dupe, hoax…. So many words; so little band width.

I see. Perhaps some would argue that Trump is not artful enough to be a cozener. Nor have his deceits escaped observation.

The Compact Edition of the Oxford English Dictionary says of cozen, “The earliest trace of the word appears to be in the derivative cousener in Awdelay’s Fraternitie of Vagabondes, 1561; it is not improbable that it arose among the vagabond class.” It also cites Stubbes with his original spelling: “vetterly,” “speake in plainer termes,” “cosoned.” 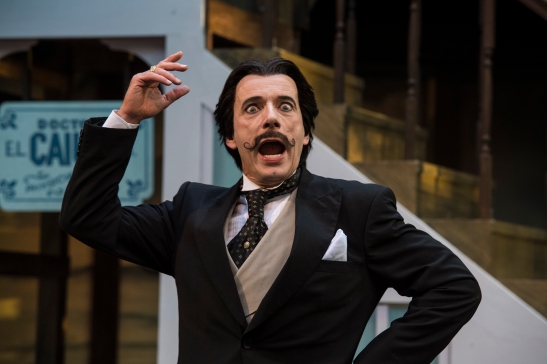 Dr. Cauis, a French physician, portrayed by Michael Elich in the Utah Shakespeare Festival’s 2018 production of The Merry Wives of Windsor. Image by Karl Hugh from St. George News.

In The Merry Wives of Windsor, 1598, Shakespeare has French physician Dr. Cauis say, “By gar, I am cozoned, I ha married oon Garsoon [un garçon], a boy.”

2 comments on “ETYMOLOGY: TO COZEN, A COZENER”

This entry was posted on January 8, 2019 by simanaitissays in I Usta be an Editor Y'Know and tagged "Merriam-Webster Online" dictionary, "The Anatomie of Abuse" Philip Stubbes: "cozened at their hands", "The Compact Edition of the Oxford English Dictionary", "The Merry Wives of Windsor" Shakespeare" "I am cozoned", cozener: Italian cozzone horse trader, etymology: cozen cozener -- deception fraud.