MY INSPIRATIONS for tidbits about World War II rationing came from several sources. Reading a social history gave “Eating Brit-Style, the 1940s,” an Anglo flavor of WWII culinary matters. And a recent “Radio Classics” episode of Lum and Abner (remember them?) prompted me to learn more about gasoline rationing here in the U.S. Indeed, I learned enough to warrant Part 1 today and Part 2 tomorrow.

Tires, Not Gas. Except for a brief period in early 1944, U.S. gasoline wasn’t the problem. Tires were. Japan’s invasion of the Dutch East Indies in March 1942 curtailed U.S. supplies of natural rubber. (See “Henry Ford’s Amazon Adventure” here at SimanaitisSays for another potential source of natural rubber that didn’t work out.) In 1940, B.F. Goodrich had developed Ameripol, a synthetic rubber, but commercialization came slowly.

The U.S. government’s Office of Price Administration, the OPA, was in charge. Owners had a limit of five tires per vehicle; any extras were taken into government supplies. Mileage restrictions were under consideration for conserving tire wear, but a more feasible means was limiting the gasoline supply.

Beginning on July 22, 1942, 17 eastern states invoked rationing programs. Despite findings of the September 1942 Baruch Rubber Report, Congress stalled on nationwide action. President Franklin Delano Roosevelt disagreed, and national rationing of gasoline began on December 1, 1942, to continue for the duration of the war.

Ration Stickers and Stamps. Vehicle owners were assigned windshield stickers together with ration books of stamps required for gasoline purchases. There was also a national 35-mph speed limit known as “Victory Speed.”

Gasoline rationing was a complex program reflecting driving needs; alas, though, not without skullduggery. There were six basic categories: A, B, C, M, T, and X. Qualification for one or the other depended upon local boards, the idea being these folks could best and fairly assess individual driving needs.

The Categories. Any driver qualified for an A, which soon gave OPA the nickname “Only a Puny A.” Cars carrying A stickers got stamps for 3-4 gallons of gasoline per week. Given that the average car of the era got 15 mpg, this implied a weekly 45 to 60 miles of war-related or family-convenience motoring.

B stickers and stamps were for those with more pressing needs, or perhaps just more persuasive powers with their local rationing boards. Maybe the aircraft plant was farther from home. Maybe sharing rides took them out of their way. These cars got eight gallons per week. 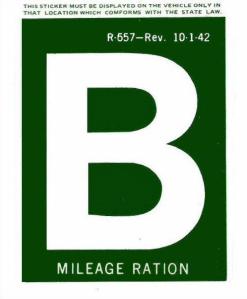 The C category, the first of several with no gallon restrictions, was intended for those performing specific services deemed critical to the war effort. There were 17 occupations identified on the car’s sticker, ranging from “Official Gov’t or Red Cross business” to “Transportation 4 or more to school” to “Essential hospital, utility, or war worker” to “Minister, Priest, or Rabbi,” and others. Curiously, at war’s end, folks were scraping C stickers off their cars, not wishing to parade their livelihoods.

M, with no limit, was for motorcyclists specifying their occupations as “Air Raid Warden Messenger,” “Western Union Messenger,” or “Postal Telegraph Messenger.”

T, also with no limit, was for truck drivers. The assumption in those days was that all trucks were used commercially. How times have changed.

X, likewise with no limit, was for those whose jobs inherently involved high mileage, traveling salesmen and the like. This coveted catchall also included police, firemen, and civil defense workers. 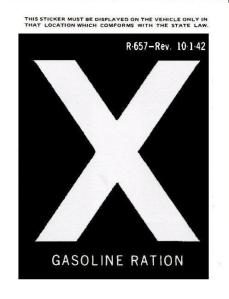 Are you surprised that a scandal erupted when 200 Congressmen received X stickers? 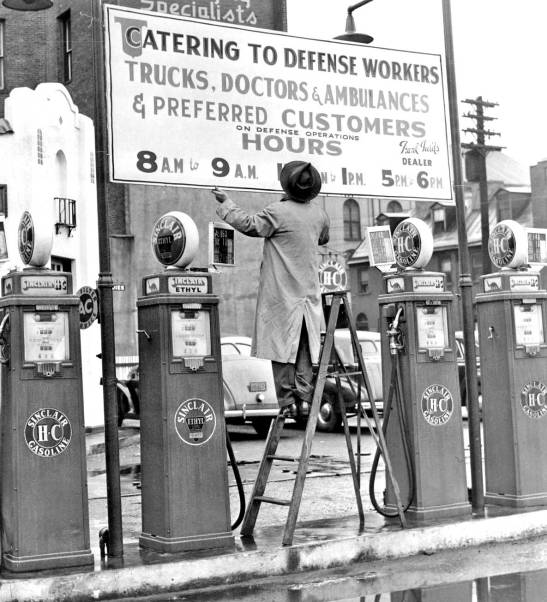 Image from The Old Motor.

Tomorrow in Part 2, Lum and Abner set better examples for us all. ds

One comment on “GASOLINE RATIONING AND OLD-TIME RADIO PART 1”