ICELAND IS a greater producer of aluminum than the United States. This and other tidbits are gleaned from The New York Times article, “American Companies Still Make Aluminum. In Iceland,” by Binyamin Appelbaum, July 1, 2017.

Note how nicely this article dovetails with “Energy Economics: Aluminum and Iceland”, offered here at SimanaitisSays back in August 2012. That is, the shift of American aluminum production to Iceland is nothing more than straightforward global economics.

Aluminum is the third most common element in the Earth’s crust, after oxygen and silicon. However, it’s only rarely found in its pure state. Aluminum is derived from bauxite, an ore mined in many places around the world.

Smelting aluminum from its ore involves several steps, one of which is the Hall-Héroult Process using electric furnaces reaching 1740–1800 degrees Fahrenheit. The process consumes 20 to 40 percent of aluminum’s total production cost. Thus, the price of electricity has a profound effect on the refining of aluminum.

Indeed, it makes economic sense to mine bauxite in Australia, say, ship it to Iceland for smelting into aluminum billets, then ship these billets to carmakers in the American midwest. 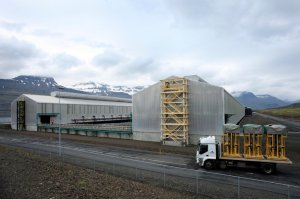 Alcoa (the Aluminum Company of America) opened a smelter in Reydarfjordur, Iceland, even as it closed factories in the U.S. This and a following image by Mark Lennihan/Associated Press from The New York Times, July 1, 2017.

According to The New York Times, “Electricity in Iceland costs about 30 percent less than what Alcoa might pay in the United States. That’s a crucial consideration, because the Alcoa smelter alone uses more than five million megawatt-hours of electricity each year—about the same as the half-million people and all the businesses in the city of Colorado Springs.”

Iceland gets the vast majority of its electrical energy from hydro as well as geothermal sources. 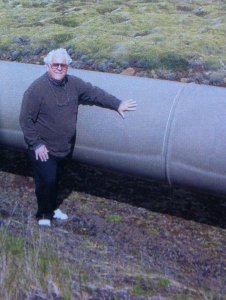 Here I am examining a means of Icelandic geothermal supply being routed to Reykjavik homes.

Reydarfjordur, site of Alcoa’s facility, is a deep-water port 420 miles northeast across Iceland from Reykjavik, the capital. Fishing was once important to Reydarfjordur’s economy, but no longer. The area fell into economic doldrums until officials recognized that a deep-water port and Iceland’s cheap electricity could transform matters.

Stacks of aluminum fabrications are ready for shipment from a smelter in Iceland.

The New York Times notes the benefits of new jobs and new people coming to Reydarfjordur: “And while Iceland is exporting aluminum to the world, she [a Reykjavik native now running two inns in a thriving Reydarfjordur] is importing all of her workers. At the moment, her three guesthouse waitresses are Polish, French, and Spanish.”

With change comes potential discord. But even this is handled with Icelandic ingenuity. Despite its economic benefits, expansion of Icelandic heavy industry was opposed by environmentalists, supported by world celebrity singer Bjork. One result was establishment of a national park encompassing almost a fifth of the country.

Icelandic planners are also learning from practices in the U.S. Pacific Northwest, another region rich in hydroelectric power. Cheap electricity has encouraged server farms, computer links that devour electricity at prodigious rates, to locate in the Pacific Northwest. Even though supply and demand inevitably raised electric rates, it’s still a win/win for the region.

Iceland is now recruiting server farms of its own. ds