THE FIRST BUGATTI IS IN MY NEIGHBORHOOD

THE LYON Air Museum is located at John Wayne Airport, not far from SimanaitisSays world headquarters in Orange County, California. Among the museum’s regular displays are an American Airlines Douglas DC-3, a Boeing B-17 Flying Fortress, a Douglas A-26 Invader, and a North American B-25 Mitchell. I have the joy of occasionally seeing these and other vintage craft in the air, their unmistakeable radials throbbing over my neighborhood.

Automotive enthusiasts have another reason to celebrate the Lyon: From July 1 through September 4, 2017, the museum has as part of its summer exhibit “European Classic Automobiles—Featuring the First Bugatti.” 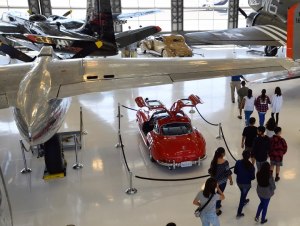 Compared with a 1937 Mercedes-Benz 540K Special Roadster, a 1938 Rolls-Royce Phantom III Sedanca de Ville by Franay, and a 1955 Mercedes-Benz 300SL Gullwing, the 1908-1909 Bugatti Type 10 is a tiny motorcar. But it’s the first of a long line of Ettore Bugatti’s le Pur Sang, and such pure-blooded sports cars are renowned worldwide. 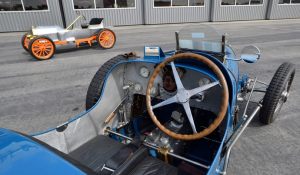 A 1927 Bugatti Type 35B, one of the world’s most successful competition cars, pays homage to the first-ever Bugatti, the Type 10. Both are part of the Lyon Air Museum display, July 1 through September 4, 2017.

Ettore Bugatti had an agreement with his employer Gasmotoren-Fabrik Deutz of Cologne that “allowed him a design office in his house in Cologne.” 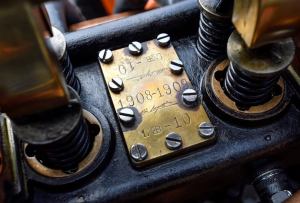 During 1908 and 1909, Bugatti put this to good use in designing and fabricating the first automobile to bear his name, the Bugatti Type 10. (Earlier types carried his employer’s moniker.) Legend has it that the design office was in the basement, requiring disassembly and reassembly of the Type 10 upon completion. 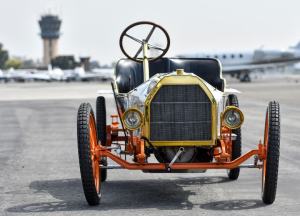 As collected in the book Bugatti Type 10 to Type 251 (Road Test Portfolio),

Dean Batchelor’s R&T article, February 1985, notes, “Bugatti called his first car petit Pur Sang, or little thoroughbred. Others called it Le Homard, or the Lobster.” This latter owed to the orange hue (possibly primer) of its chassis and wheels. The aluminum bodywork is unpainted. 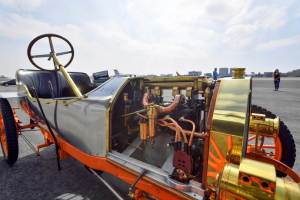 The Type 10’s four-cylinder engine has a 62.0-mm bore and 100.0-mm stroke, giving a displacement of 1208 cc, appropriate for the “voiturette” formula, as opposed to the 10-liter monsters of the day. Curiously, voiturette rules were defined simply by bore and cylinder count, not stroke nor displacement: one cylinder, 100-mm bore; two cylinders, 78-mm bore; and four cylinders, 62-mm bore. 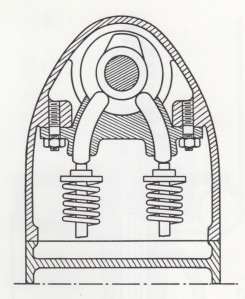 Atop the Type 10’s cast-iron block, a single overhead camshaft actuates valves through “banana tappets” sliding in matched curved housings. Batchelor writes, “Horsepower is said to be only 15, but it is sufficient to propel the 810-lb. car at 55 mph on a level, smooth road.” (I’m guessing a rare condition in 1909.) 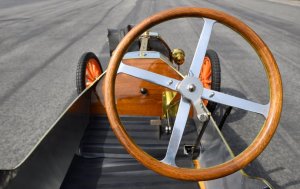 The Type 10’s driver has an intimacy with the elements and a good deal to do: The car’s wood-rimmed steering wheel contains a spark advance control. Its gear lever and handbrake are on the right. The left pedal works the clutch; the right pedal is the foot brake; and, not unknown in its era, the roller in the middle is the throttle. 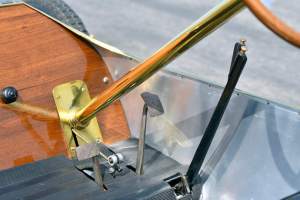 Batchelor also cites the influence of French aviator Louis Blériot, who was first to fly the English Channel, 1909: “Blériot was a house guest of the Bugattis in Colonge…. According to L’Ebé [Ettore’s daughter], Blériot’s enthusiasm for the diminutive machine helped Bugatti make the decision to stop working for others and go into the car business in a serious way.” 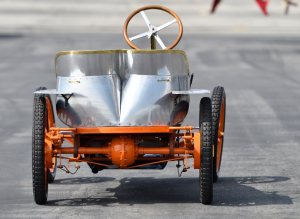 How very appropriate that the Bugatti Type 10 resides, even if only temporarily, at the Lyon Air Museum. And how very convenient it is for me to admire the car first-hand. ds

3 comments on “THE FIRST BUGATTI IS IN MY NEIGHBORHOOD”