DESPITE OUR “paperless society,” my computer printer still inexplicably keeps asking for the stuff. And I learned a lot more about it in the London Review of Books, June 15, 2017, discussion of Paper: Paging Through History, by Mark Kurlansky. 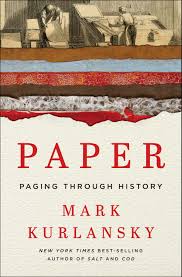 The LRB’s review by Adam Smyth is titled “Ropes, Shirts or Dirty Socks,” suggesting some of the potential cellulosic materials that can be transformed into paper. Other tidbits that caught my eye were the historical origins of paper, a circuitous route indeed in its international development, and curiosities about how it has been used through history.

For instance, LRB reviewer Smyth notes that, for much of paper’s history, wrapping was its primary function. In the 17th century, “printers used paper to fill their workship windows: it kept the heat in during winter, and direct sunlight off the printed sheets in summer.”

Both Smyth and author Kurlansky acknowledge another essential use of paper, what England’s first Poet Laureate (1668) referred to as “Reliques of the Bum.” TP humor has a long history: In William Hogarth’s A Just View of the British Stage, 1724, there are pages from Macbeth, Julius Caesar, and Hamlet hanging in readiness next to a privy.

A Just View of the British Stage, engraving by William Hogarth.

Smyth notes that Kurlansky’s tale “begins in Second-Century China and briskly traces paper’s spread to Vietnam, India and Tibet.” By the Eighth Century, “paper mills operating in Japan were producing paper with no yellowing acid content: a sheet looks pretty much the same today as it did 1200 years ago.”

Paper was produced in Baghdad and Damascus before the Ninth Century too. Reaching Europe, it was known as charta damascena. By contrast, mills in North Africa came later, “perhaps owed to the sustained dominance of parchment in a herding society.”

Parchment and its sibling vellum were produced from animal skins that were degreased, freed of hair, stretched and scraped. By contrast, producing paper was originally rather more involved, but with a process similar to that used today: Its cellulose was extracted from plant cell walls, then this pulp was mixed with water. The blend was shaken on a fine metal mesh, the water draining and the pulp fibers interlocking into a thin layer. This layer was then flipped off the mesh to dry. Sizing (a protective, anti-absorbent compound) and finishing followed.

Europe was late getting into paper production. However, by the 13th Century, Italian papermakers had devised, among other advances, the invention of the watermark: an added piece of wire in the mesh that would leave an identifying symbol in the paper.

The title page of the Shakespeare First Folio, 1623.

This prompted a bit of added reseaerch: A foolscap folio is foolscap paper size folded once. The Gutenberg Bible was a folio; as were early Shakespeare editions. Similarly, quatro editions have their paper folded twice; octavo, three [Thanks, Andrew Dewar, for correcting my “four”] times.

Smyth observes that for much of the 16th and 17th Centuries most British production wasn’t white paper; it was coarse and brown. Huguenot papermakers, fleeing religious persecution in France in 1685, brought Brits the manufacturing skills needed to produce fine white paper.

For the record, the London Review of Books gets its paper from the Anjala Paper Mill, near Kouvola, in southern Finland. The wood, generally spruce, comes from sustainable forests and is transformed into a stock called StellaPress HB.

Kurlansky is “untroubled by the impact of digital culture on the material page (‘Even computer people enjoy printed books.’)”

Smyth ends his review on an equally happy note: He cites “the 2.5 million remaindered Mills & Boon [Brit modern romance] novels used to make asphalt for the M6 in 2003.” ds