SHERLOCKIANS RECOGNIZE Irene (pronounced I-re-nee) Adler as “The Woman,” the most highly respected of her gender by Holmes. Another woman, perhaps lesser known, was a Sherlockian extraordinaire: Edith Meiser.

In addition to her Sherlockian activities, Edith’s career included writing mystery novels; a radio serial for actress Helen Hayes; and a play, The Wooden O, about Shakespeare’s Globe Theatre. She performed on the radio with the Marx Brothers. And she was Mrs. Littlefield in two 1952 episodes of TV’s I Love Lucy.

Edith was born in Detroit in 1898. Her education was anything but a Midwestern norm: After the Liggett School in Detroit, she studied at Kox Schule in Dresden, Germany, and the Ecole de la Cour de St. Pierre in Geneva, Switzerland, all this before attending Vassar College.

During her four years at Vassar, Edith got involved with the college drama society. After graduation she performed with the American Shakespeare Festival, The Theater Guild, Edward Albee’s vaudeville circuit, Jessie Bonstelle’s Summer Stock Company and in the late 1920s’ Garrick Gaieties revue.

Edith and her husband Thomas McKnight, both Sherlockians, tried to interest burgeoning radio networks in putting Holmes stories on the air. Reluctant at first (why would Holmes sell in America?), finally a broadcaster went along with the idea when Edith not only wrote the scripts and hired the players, but arranged the sponsor as well.

The first U.S. radio broadcast of Holmes came on October 20, 1930, with William Gillette starring in Edith’s radio adaptation of “The Adventure of the Speckled Band.” Gillette had brought Holmes to American stages in 1899 and to a U.S. film in 1916. 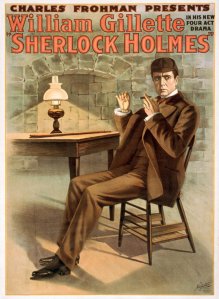 By 1930, William Gillette remained the prototypical Holmes. Edith later related that, after directing Gillette in the New York City radio broadcast, she worried about his getting to his estate in Deep River, Connecticut, near the Massachusetts border. No problem: Gillette, age 80, hopped on his motorcycle and motored home!

These radio shows continued until 1936 and were revived in the fall of 1939, encouraged by the success of Basil Rathbone’s film portrayal of Holmes in The Hound of the Baskervilles and The Adventures of Sherlock Holmes. 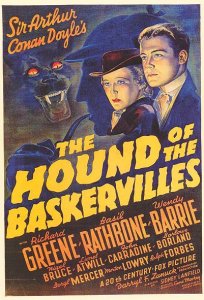 The “Red” and “Blue” Networks of NBC broadcast Edith’s scripts for Basil Rathbone and Nigel Bruce from 1939 to 1942. (NBC Blue Network was split off by government edict; eventually it became ABC. The Red Network remained as NBC.)

In total, 220 episodes of Sherlock Holmes radio adventures were broadcast, of which 103 are available for download from oldradioworld.com.

In 1942, the half-hour show moved over to the Mutual Radio Network. According to William Nadel, Baker Street Irregular member and radio historian, “… one of the conditions of continuing the show on the Mutual Network was that Edith would come up with ‘new adventures.’ This she did through the middle of 1944 and then picked it up again in 1947 through the summer of 1948.”

Her biography at tv.com notes “Meiser’s adaptations and original stories were praised by Conan Doyle’s family, and she steadfastly refused to add violence and sex to the stories to get bigger audiences.”

Edith became a celebrated figure among Sherlockians and was made an honorary member of the Baker Street Irregulars. For a brief stint in the 1950s, she ran a Holmes newspaper comic strip, devised jointly with Frank Giacoia, who went on later to co-author Marvel Comics’ Captain America. 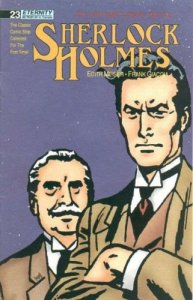 At the same time, Edith had her acting career. Her 1993 obituary in The New York Times cites movie roles in The Middle of the Night, 1959, based on Dorothy Parker stories; It Grows on Trees, 1952; and Queen for a Day, 1951. Edith was also on the board of governors of Actors Equity and a chairwoman of the Equity Library Theater.

The Edith Meiser Collection is part of Special Collections and Rare Books at the University of Minnesota, Minneapolis. Its 14 boxes and 12 volumes include manuscript material, carbon, ditto and mimeograph copies of stories regarding Sherlock Holmes.

Quite a career for kid who fell in love at age 11 with the world’s greatest consulting detective. ds

This entry was posted on May 26, 2016 by simanaitissays in The Game is Afoot and tagged Al Hirschfeld Edith Meiser illustration, Edith Meiser Collection University of Minnesota, Edith Meiser Sherlockian, Frank Giacoia.