RAYMOND SOMMER’S straw-hatted participation in the 1938 Le Mans race was cited two days ago. Today I am delighted to follow up with an essay on the car he drove, an Alfa Romeo 8C 2900B specifically built for Le Mans.

The Alfa Tipo Le Mans during construction at Carrozzeria Touring. This and the following images from primotipo.com.]

Carrozzeria Touring employed its Superleggera (superlight) technology in fabricating aerodynamic berlinetta coachwork for this Alfa 8C 2900B. Others of the series, no more than 40 in total, were open spyders including the pair finishing 1-2 in the 1938 Mille Miglia. Furthermore, another berlinetta with less streamlined coachwork later garnered fame by placing first at the inaugural Watkins Glen Grand Prix in 1948.

In addition to his first-lap lead and crowd-pleasing tip of the hat, Sommer later posted the race’s fastest lap in 5 minutes 13.8 seconds, an average 96.1 mph. By the 19th hour, he and co-driver Biondetti had built up a lead of 11 laps, 1 hour or almost 100 miles.

A routine pit stop for the Alfa before things deteriorated.

A blown tire took away part of the Alfa’s bodywork, necessitating lengthy repair. This was followed by a succession of mechanical problems, perhaps over-revving that led to failed valve gear.

After its domination, mechanical ills put paid to the Alfa’s chances.

The Sommer/Biondetti Alfa retired after 20 hours and 219 laps. Though a DNF, the car’s accumulated 1835 miles were a greater distance than any but the top three finishers. The Delahaye 135 CS of Eugéne Chaboud and Jean Trémoulet won.

The 8C 2900B Speciale Tipo Le Mans resides today in the Museo Storica Alfa Romeo in Arese, Italy, just north of Milan. It has been featured in several magazine articles, including an R&T “Salon” piece by John Lamm in July 1991.

The Vittorio Jano-designed 2905-cc straight-eight. This and the following images by John Lamm from R&T, July 1991.

For 8C 2900 power, engine wizard Vittorio Jano essentially aligned a pair of inline-fours, with their dual overhead camshafts and twin Roots superchargers driven off the center of the crankshaft. (One benefit of this was avoiding the whippiness of a long crank.) 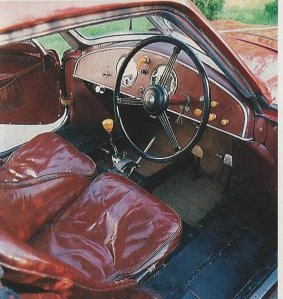 The cockpit of the Alfa is not overly roomy, its twin bucket seats separated by a leather-covered divider to help hold the driver in place. The driver’s view to the rear was all but nonexistent. 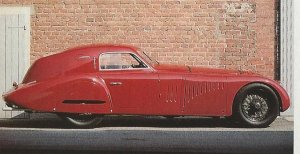 The Alfa driver’s sole view to the rear comes through a small window perched high on the car’s aerodynamic tail.

When you’re pulling away from the competition, what does it matter?

Alfa Romeo Through the Shasta Daisies by Sue Steele Thomas. Image from primotipo.com.

This particular Alfa wasn’t as supremely successful in its racing career as some others of the marque. However, success can be measured by a different metric. ds