WELL, DOES the Casa di Reclusione Milano Bollate sound like a setting for an Italian restaurant? Then again, it is Milan’s Bollate Prison, a medium-security slammer. No matter, because InGalera, Italian slang for our “In Stir,” is a restaurant within the prison walls and it’s a hot choice for Risottino ai finferli (risotto with chantrelles) followed by Medaglioni di pescatrice (Medallions of monkfish). 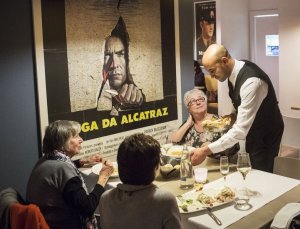 Or what about four British restaurants collectively known as The Clink, each located within one of Her Majesty’s lockups? A Winter 2016 menu for The Clink includes a starter of Seafood terrine layered with scallops, horseradish emulsion and beetroot crisps, followed by a main course of Sesame-coated duck breast, bok choy and julienne of vegetables in an Asian-style broth and served with sticky rice.

The Clink, within England’s High Down Prison. Image from BBC Radio 4.

This concept of culinary skills as rehabilitation of the incarcerated isn’t new. In 2006, Italy’s Fortezza Medicea high-security prison began operating a restaurant within its Renaissance walls just outside Pisa. In 2009, The Clink Charity and Her Majesty’s Prison Service launched its first restaurant at High Down Prison in Sutton, Surrey, about 10 miles south of central London. Today, The Clink’s four locations are in Brixton (south London), Cardiff (Wales), the original High Down and Styal (in England’s northwest, near Manchester). 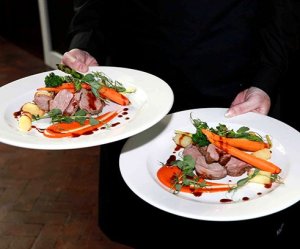 The grub at The Clink, Styal, is artful indeed. Image from The Clink website.

Success of the concept is offered by statistics from The Clink: Between 2009 and January 2012, 111 prisoners were trained. Twenty-six of them served their time and were released, 22 of whom remain in full-time employment. Only 2 of the 26 are back in stir, a recidivism rate of less than 8 percent.

Rates of recidivism vary with methodology of the study. However, one source cites Great Britain’s average return to incarceration within two years of release at 59 percent. To put this country’s data in perspective, the same source cites two-year recidivism rates of 36 percent in the U.S. and 20 percent in Norway, the lowest cited among the nations studied. 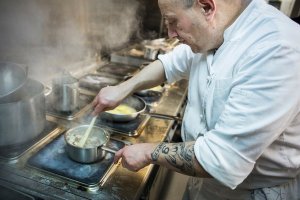 An inmate-chef at InGalera works his magic with risotto. Image by Gianni Cipriano/The New York Times.

The Clink and InGalera are distinct from another trend of prison-theme dining. Such faux settings in Boston and Tokyo, to name two, offer gourmet experiences behind mock bars with waiters in prison garb.

Dining at a real prison has a few restrictions: Certain suspicious types may be denied reservations. Diners are searched before entry. Cell phones aren’t permitted. Plastic cutlery, albeit of a classy variety, may be used.

As Oliver Twist said, “Please, sir, I want some more.”

This entry was posted on March 12, 2016 by simanaitissays in Just Trippin' and tagged InGalera Milan Bollate, prison dining in Italy and Great Britain, The Clink Charity UK.