A BOOK of Sherlockiana introduced me to the term cynology, “logy” as in “the study of,” cyno from the Greek κυνóς, “dog.” As is usually the case, this book led me from one thing into another having to do with its topic. 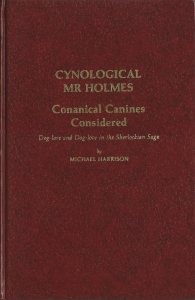 Michael Harrison, 1907 – 1991, was the pen name of Maurice Desmond Rohan, a British Sherlockian who found appreciative audiences in North America too. Among other honors, he was named Irregular Shilling by the Baker Street Irregulars of New York in 1964. In Sherlock Holmes Handbook: Second Edition, fellow Sherlockian Christopher Redmond wrote of Harrison’s “courtly Edwardian presence, with a gallantry to women and a striking appetite for liquor.”

Noted on the title page of Cynological Mr Holmes, “I am a dog-fancier myself,” said Holmes in “The Adventure of Shoscombe Old Place.” Shoscombe is 7 miles south of Bath, in Somerset about 120 miles west of London. Holmes’s chronicler John H. Watson observes that Shoscombe Old Place is known for its Shoscombe spaniels, “the most exclusive breed in England.”

In The Annotated Sherlock Holmes, William S. Baring-Gould quotes another Sherlockian (and evident cynologist) who notes, “Of course Watson means strain, for the breed is spaniel.”

Harrison’s Cynological Mr Holmes cites “a full baker’s dozen of Watson-recorded dogs, with some others of less importance, who may be considered in this Canonical Dog-Show, as having no more than ‘walking-on parts.’ ”

“But not such a hound as mortal eyes have ever seen.” Illustration by Sidney Paget for the Strand Magazine, March, 1902, from The Annotated Sherlock Holmes.

Likely the most memorable mutt in the Canon is “The Hound of the Baskervilles.” Harrison notes that this Old English Mastiff comes fifth in chronology of Watson’s “baker’s dozen” (which, curiously contains only 12 entries.) Here’s Harrison’s listing. 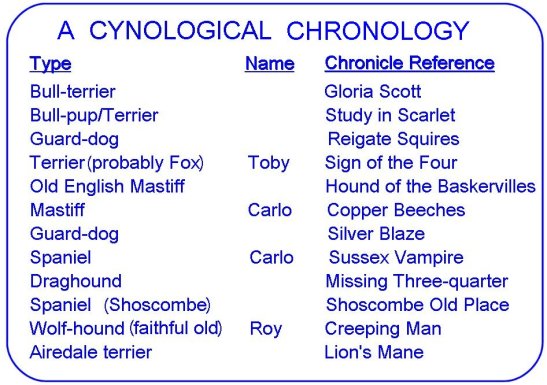 When Watson and Holmes first meet, in “A Study in Scarlet,” Watson admits to keeping a “bull-pup,” which, it seems, is never heard of again at 221 B. However, Harrison conjectures that perhaps the dog actually lived below stairs with Mrs. Hudson. It’s possible the unnamed dog reappears later in the tale (though how it ages from bull-pup to “that poor little devil of a terrier” is never explained).

A canine named Carlo appears twice in the Canon, but it’s not the same dog. Carlo of “The Adventure of the Copper Beeches” is a mastiff, described as “a huge famished brute, its black muzzle buried in Rucastle’s throat…”

Carlo the mastiff is dispatched by Watson with a single shot in “The Adventure of the Copper Beeches.” Illustration by Sidney Paget for the Strand Magazine, June 1892, from The Annotated Sherlock Holmes.

By contrast, Carlo of “The Adventure of the Sussex Vampire” is a spaniel, poisoned by a nefarious testing of South American curare poison.

Somehow, I’d not have been surprised by two Fidos. But two named Carlo??

One of my favorite Canonical canines is the almost anonymous Guard-dog in “Silver Blaze.” He made Harrison’s list and was also featured, indirectly, in an R&T “Tech Tidbit” of mine, all because of “the curious incident of the dog in the night-time.”

Police detective Gregory says to Holmes, “The dog did nothing in the night-time.”

Holmes responds, “That was the curious incident.” ds

This entry was posted on February 27, 2015 by simanaitissays in The Game is Afoot and tagged Cynolocial Mr Holmes by Michael Harrison, cynology dog lore, Leo Bestgen, Sherlock Holmes, The Annotated Sherlock Holmes by William S. Baring-Gould.