THIS RAKISH guy named Cody with long flowing hair and cowboy garb must be the famed Buffalo Bill, right? A common conclusion. 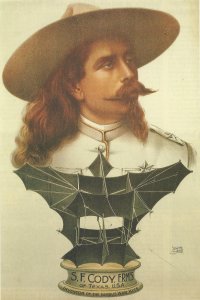 In fact, though, this particular Cody was born Samuel Franklin Cowdery in Davenport, Iowa, 21 years after William Frederick Cody, Wild West showman extraordinaire was born in 1846. Buffalo Bill was considered perhaps the most recognized celebrity on earth at the turn of the 20th century. 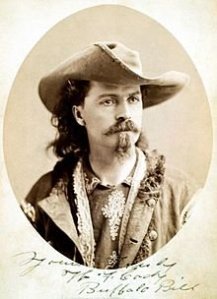 Not much is known about Cowdery’s early life (except stories he concocted later), but it is recorded that in 1888, he joined Forepaugh & The Wild West, an outfit not renowned for subtle self-promotion. 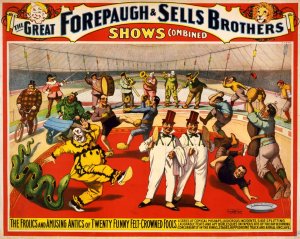 By 1889, S.F. Cowdrey had changed his surname to Cody in marrying Maud Maria Lee. This nuptial didn’t preclude what was assumed to be his 1890s’ marriage to British stage mother Elizabeth Mary King, later aka Lela Marie Cody. She, S.F. and her two children of the King union toured British music halls in “The Klondyke Nugget,” a demonstration of trick shooting, lassoing and equestrian skills.

In 1901, S.F. was issued a British patent on what came to be called the Cody War Kite. He told people that, back in his American cowboy youth, a Chinese cook had taught him about kites. More likely, he gained the interest from Auguste Gaudron, pioneer balloonist with whom S.F. shared a billing at London’s Alexandra Palace.

The idea of a war kite wasn’t completely daft. Balloons were used for military observation since the U.S. civil war, however any significant wind prohibited their flight. By contrast, a war kite profited from a strong breeze. 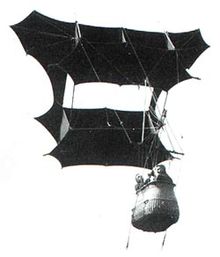 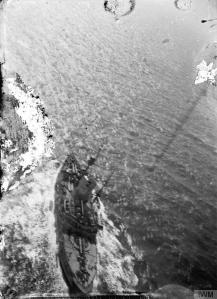 Next, Cody turned to the challenge of powered flight, first with British Army Dirigible No. 1, the Nulli Secondus (“Second to None”).  Then he devised a heavier-than-air craft, backed by authorities as British Army Aeroplane No. 1. His October 16, 1908, achievement is recognized as the first sustained powered heavier-than-air flight in Great Britain. 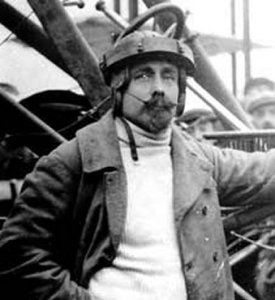 Cody earned British Aviator’s Certificate No. 9 in 1910, predated by the likes of No. 1, J.T.C. Moore-Brabazon (see http://wp.me/p2ETap-1vJ for the aircraft named in his honor) and No. 2, the Hon. Charles Stewart Rolls (of Rolls-Royce, and the first Briton to die in a flying accident when his Wright Flyer broke up in flight in 1910.) 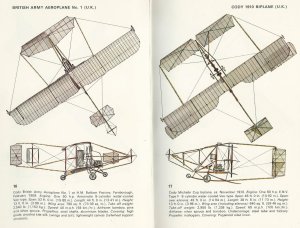 [n the left, the Cody British Army Aeroplane No. 1, 1909. On the right, Cody’s Michelin Cup Biplane, 1910. Image from Pioneer Aircraft 1903-14 (the Pocket Encyclopedia of World Aircraft in Colour series)

The British Empire Michelin Trophy was established by the French tiremaker in 1909. Administered by the Aero Club of Great Britain, the award recognized achievements of British subjects flying craft of British construction.

S.F. perished in a crash of his Cody Floatplane in 1913. He was buried with military honors in Aldershot Military Cemetery, near Farnborough, site of many of his flights and home of today’s Farnborough International Airshow.

Cody resided in Ash Vale, Surrey, where his former home is marked with a historical plaque. Next door is Cody Cars, run by his great-grandsons. The used car firm features an aeroplane on its sign.

I believe the fellow named Cowdery would understand. ds