ANGELA PALMER’S ART OF FORMULA ONE

IMAGINE SEEING a modern Formula One engine deconstructed before your eyes. More difficult for me, imagine seeing this through the eyes of a talented artist.

Renault’s top-security headquarters in Viry-Chatillon, France, is the home of its F1 engines, including those used by Fernando Alonso in his 2006 World Drivers’ Championship as well as by Sebastian Vettel in his four consecutive titles, 2010 – 2013.

This year’s F1 engines are completely different (see http://wp.me/p2ETap-24d for a look at Mercedes’ 2014 hybrid power system). These changes removed the cloak of secrecy from Renault’s all-conquering RS26 and RS27 V-8s, and allowed British artist/F1 enthusiast Angela Palmer into the Viry-Chatillon works. 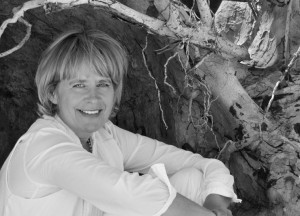 Palmer’s solo show, in collaboration with Renault Sport F1, is aptly titled “Adrenalin.” It’s at London’s Fine Art Society until December 23, 2014. Fortunately for those of us far from London, a virtual tour can be taken at http://www.angelaspalmer.com.

As noted in the catalog, “In her sculpture, Palmer shifts the focus from function and mechanism to the visual power of form and material.” 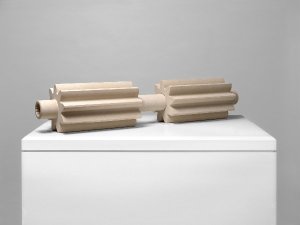 Palmer was given access to actual hardware as well as engineers’ CAD drawings of the engines. As one example, she transformed this medium into a multilayer array of amazing complexity.

Like many other pieces in the exhibit, the V8 Engine is for sale, in this case as one of an edition of three.

Palmer sensed “an intestinal quality” of complex F1 exhaust systems. She doubled their size and did one in American black walnut, the other in red-hot resin. 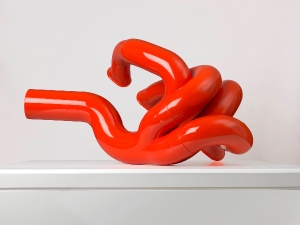 The catalog notes that the Renault’s F1 exhaust reached 1000 degrees Celsius (more than 1800 degrees Fahrenheit) within five seconds of operation.

Palmer also admired the nature of race circuits. She observed, “Seen in the abstract, they are redolent of Eastern calligraphy.” 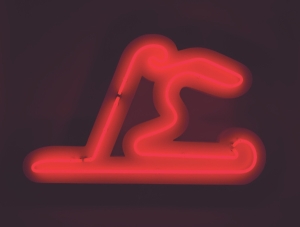 Included in these race circuit constructions of neon on aluminum are Monaco, Singapore’s Marina Bay street circuit, Brazil’s Interlagos, Goodwood, Spa-Francorchamps, Suzuka (one from overhead, another from aerial perspective view) and Shanghai (its shape inspired by the Chinese character shang, 上). 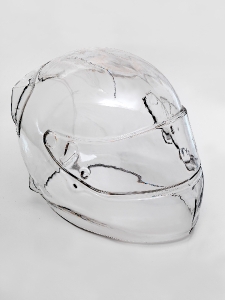 The catalog notes that Palmer’s F1 Helmet, cast in a delicate crystal glass, reminds us “of the ever-present fragility faced by drivers in the fastest motor sport in the world.” ds