A CAR’S wheels rotate, they don’t go up and down. Thus, whatever other complications in moving a car, there has to be a basic transformation of reciprocating pistons into rotating wheels.

Unless the engine is a traditional rotary.

And, indeed, though uncommon, there have been cars and motorcycles using rotary powerplants.

The Millet motorcycle was among the earliest vehicles of any sort powered by internal combustion. Designed in 1892 by Frenchman Félix Théodore Millet, it had a 5-cylinder rotary engine integrated into its rear wheel. That is, its crankshaft was the bike’s (non-rotating) axle; the engine rotated with the wheel.

What’s more, Millet’s motorcycle is believed to have been the first to use pneumatic tires and a handlebar twistgrip as throttle. The rotary engine produced perhaps 3/4 hp at 180 rpm, with the bike reaching a top speed of 22 mph.

The German Megola motorcycle was in production between 1921 and 1925. Its 5-cylinder rotary, of the single-valve Monosoupape variety, was integrated with its front wheel. Top speed was said to be 52 mph, enough to garner a win in the German Championship in 1924.

A total of 2000 Megolas were built. One resides in the Deutsche Museum, Munich; another, at the Guggenheim Museum, New York City. 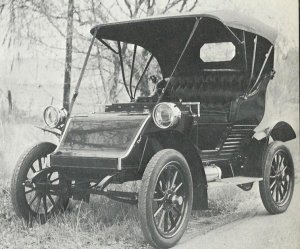 The Adams-Farwell was the most successful of rotary-powered automobiles. Image from The Complete Encyclopedia of Motorcars 1895 to the Present, edited by G.N. Georgano, E.P. Dutton, 1970.

Four-wheeled vehicles powered by rotaries include the Adams-Farwell, Bailey, Balzer and Carey, more or less listed in descending order of success. A Carey was exhibited at the A.C.A. (Automobile Club of America) Show in 1906. It used a vertically aligned front-mounted air-cooled five-cylinder rotary designed by Stephen M. Balzer. Balzer’s own companies (two of them) built rotary automobiles between 1894 and 1900. He also got involved with aviation (see yesterday’s item, http://wp.me/p2ETap-25K).

The Adams-Farwell, built between 1898 and 1913, initially had three-cylinder rotary power. Later iterations from this Dubuque, Iowa, firm had five-cylinder rotaries, horizontally mounted at the rear.

Adams-Farwell offered more than a dozen models, the largest being the Model 9 50-hp seven-passenger Touring car. A Series 6 40/45 Touring Victoria resides at the National Automobile Museum in Reno, Nevada. Learn more about its engine in action at http://goo.gl/Qj6n9.

As another company slogan said, “It spins like a top!”

Adams-Farwell rotary modified for use in early autogiro aircraft experiments. Image from the National Air and Space Museum, http://www.airandspace.si.edu.  .

The engines were designed by Farwell, whose patents ranged from a merry-go-round drive to a device that allowed machine guns to fire between whirling propeller blades.

There were two automobiles carrying the name Rotary, neither of which used rotary power. Despite its name, the Rotary Motor Vehicle Company, in Boston, 1904 – 1905, used quite another sort of engine, characterized by a single vertical cylinder with two connecting rods and two crankshafts; the car was also known as the Intrepid.

The other Rotary, built by Bournonville Motors Company of Hoboken, New Jersey, 1922 – 1923, came by its name legitimately through use of its engine’s rotary valves.

Last, as seen at the 2004 Pebble Beach Concours d’Elegance, the 1925 Julian’s rear engine sure looks like a rotary. Indeed, though, it’s a (non-rotating) radial. Like the Adams-Farwell, this example, only one of six produced, resides in the National Automobile Museum in Reno, Nevada. ds

This entry was posted on May 2, 2014 by simanaitissays in Classic Bits and tagged Adams-Farwell, Bailey, Balzer, Carey, Julian radial car, rotary-engine automobiles.