AMERICAN HONDA TAKES TO THE AIR

THE HondaJet is one of the coolest Hondas in the world. With a little more than a decade in development, this light business jet is in its final stages of certification by the Federal Aviation Administration. Its manufacturer, Honda Aircraft Company, Greensboro, North Carolina, is a wholly owned subsidiary of Honda Motor Company.

The MH02 first flew in 1993. Among its innovative features were its high-mounted engines and all-composite structure, the world’s first light business jet of this material.

Never intended for production, the MH02 eventually resided in the Honda Collection Hall, part of the company’s Twin Ring Motegi complex. (I’ve sat in the MH02’s cockpit there, about 100 miles north of Tokyo.) 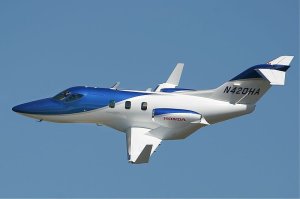 The HondaJet is now in its final stages of FAA certification.

An evolution of the MH02, the HondaJet, is nearing production. This aircraft made its public debut at the EAA AirVenture in Oshkosh, Wisconsin, in July 2005. Plans for production were confirmed a year later, with a marketing partnership with Piper Aircraft. 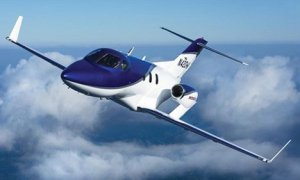 The HondaJet’s over-the-wing engine placement allows for more space within the fuselage, reduces drag and isolates engine noise and vibration from the cabin. Its fuselage is fabricated of carbon fiber. Its wings and tail components are metal. 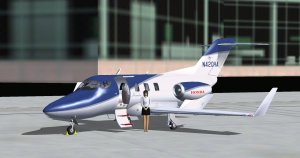 Thanks to Japanese simmer Mitsuya@Hamaguchi, flight simmers have been enjoying the HondaJet since 2007.

According to Honda, lightweight materials, aerodynamics and efficient engines give the HondaJet as much as a 35-percent advantage in fuel efficiency compared with characteristics of other light business jets. 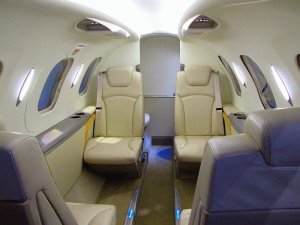 Interior of the HondaJet.

The aircraft can be configured for five or six passengers, with Hondaesque touches such as movable seat location. It is being certified for operation by one or two pilots. A full Garmin G3000 glass cockpit is featured.

The HondaJet’s pilots have a full glass cockpit, all of the instrumentation housed in digital displays. 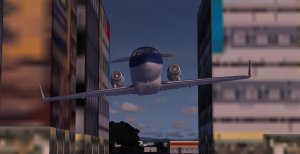 Certification of a new aircraft is a complex process at many levels. Airframes are subjected to static testing on the ground; others are flight-tested under a variety of conditions. Several delays of the HondaJet were based on eliminating engine susceptibility to ice damage.

The HondaJet buzzes Tokyo’s Budokan, thanks to Microsoft Flight Simulator.

Throughout 2013, significant milestones brought the aircraft closer to full certification. On December 20, 2013, the HondaJet achieved FAA Type Inspection Authorization, an important step in the full certification process. (See http://goo.gl/uf2nNn for an overview of the entire process.)

Honda is evidently confident of the HondaJet’s capabilities. Check out the marketing messages at http://goo.gl/vMuBWx. To cite a Honda slogan, these certainly show the Power of Dreams. ds

This entry was posted on February 12, 2014 by simanaitissays in Vintage Aero and tagged Honda Aircraft Company, Honda MH02, HondaJet.