A FABULOUS car, the 1954 Ex-Juan Manuel Fangio Mercedes-Benz W196 Grand Prix machine, recently changed hands for a fabulous price—$29.7 million. This Bonhams sale, at Goodwood Festival of Speed on July 12, 2013, set a record for a car at auction.

Indeed, a little more than a month later, on August 17, 2013, a Ferrari 275 GTB/4*S Spyder with North American Racing Team heritage approached this price in an auction sale of $27.5 million. And, while we’re talking money, I note that private transactions of $30 million have been reported for exchanges of Ferrari 250 GTOs. 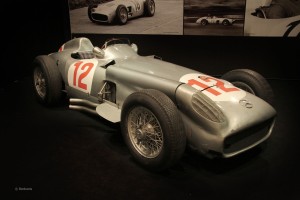 But it isn’t the money that interests me here. It’s the technical wizardry of the Mercedes-Benz W196, something this car will retain despite any future auction exuberances.

The World Drivers’ Championship started in 1950, with varied displacements of cars for the first few years. Italian machines dominated, initially Alfa Romeo, then Ferrari and Maserati, the latter through the artistry of El Maestro, Argentine Juan Manuel Fangio. For the 1954 season, engine regulations called for displacements of normally aspirated 2.5 liters or supercharged 750 cc.

Returning to Grands Prix for the first time since the 1930s (when their engines were invariably supercharged), Mercedes-Benz studied both options and concluded, as did the competition, that unblown 2.5 liters offered more potential. However, their engine design was far from ordinary.

The W196 engine’s direct fuel injection evolved from that of the Daimler DB 600 aircraft engine powering the Messerschmitt Bf 109 fighter. Image from Bonhams.

The W196 engine is a straight-eight, but fabricated as a pair of four-cylinder blocks, each with integrated head. Output and gear drive for its twin overhead camshafts come from the middle of the engine, between cylinders four and five. This mid-engine output mitigates any flexing of its lengthy crankshaft. 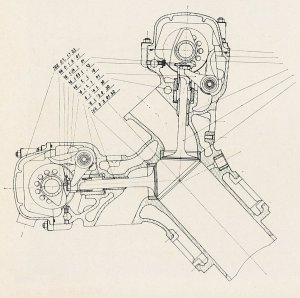 Angling the engine to 60 degrees from vertical reduces its height and, thus, height of the bodywork. For optimal fore/aft weight distribution, the engine resides completely aft of the front wheel centerline. Typical of the era, the W196 chassis is a space frame of small-diameter tubing. 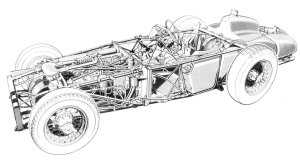 Brakes are bi-metal finned drums. (Discs were not yet ubiquitous in Formula 1; Jaguar was exceptional in having them in its sports cars.) To minimize unsprung weight, the W196’s drums are mounted inboard, acting on the front wheels through substantial shafts, those at the rear on either side of the differential. 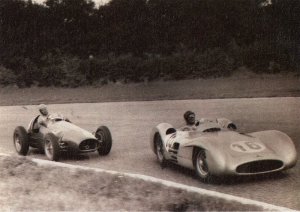 Mercedes introduced the W196 with fully enveloping bodywork, but drivers preferred the open-wheel version. Here, at Monza in 1954, Fangio is followed by the Ferrari of Froilán González.

Engineers recognized the aerodynamic benefits of enclosed wheels, and W196 Stromlinienwagens placed 1-2 in their debut at the 1954 French Grand Prix at the high-speed Reims circuit. Even Fangio, though, crumpled bodywork at England’s Silverstone circuit, and open-wheel variants were produced in time for Nürburgring’s German Grand Prix. The Stromlinienwagens reappeared at Monza, another open high-speed venue, where Fangio placed first. 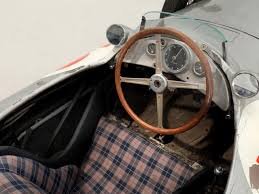 The Bonham sale W196 was Fangio’s winning car at the 1954 German and Swiss Grands Prix. See http://goo.gl/ejpnUU for a wonderful Bonhams video.

El Maestro in the process of winning the 1954 German Grand Prix.

The car was consigned to the Bonhams auction by the Emir of Qatar; its buyer was “an overseas bidder on the telephone.” One who evidently didn’t mind the cost of the call—but what a fabulous outcome! ds

This entry was posted on September 3, 2013 by simanaitissays in Classic Bits and tagged Bonhams auction at Goodwood Festival of Speed 2013, Mercedes-Benz W196 Ex-Fangio.