THE TALE of the Dornier Do-X flying boat has technicalities galore, an impressive world tour—and even a bit of post-Versailles skullduggery. 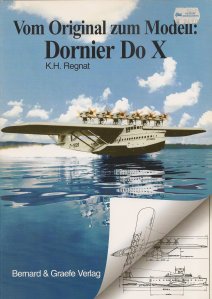 Vom Original zum Modell: Dornier Do X, by K.H. Regnat, Bernard & Graefe Verlag, 1998. My copy is from the Museum Sinsheim & Spyer (http://www.technik-museum.de/en). The book is also listed at www.abebooks.com. The fold is part of the cover design.

In the early days of aviation, the efficacy of a flying boat for airliner design was well known. Its wide hull gave spacious accommodations. Any sufficiently long, broad—and smooth—expanse of water anywhere in the world could be its runway. 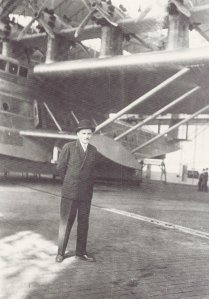 Claude Dornier, 1884-1969, in front of the original Do-X (note its air-cooled engines). This and other images from the book Dornier Do X. Look for Claude Dornier in a wonderful contemporary video, http://goo.gl/ZBAQD.

German aircraft manufacturer Claude Dornier started the Do-X design a decade before D-1929 (its German registration number) lifted off the water for the first time on July 25, 1929. The Do-X’s wingspan of 157.5 ft. and liftoff weight of 123,500 lb. made it the largest and heaviest aircraft of its era. (A modern Boeing 747 is larger and considerably heavier. However, the Boeing 737 has a wingspan of 93.4 ft. and takeoff weight of around 150,000 lb.)

The Treaty of Versailles after World War I restricted Germany in its design and manufacture of aircraft carrying any military implications. See www.wp.me/p2ETap-W8 and www.wp.me/p2ETap-XP for two aspects of this. In an apparent sidestepping of the treaty, the Dornier Do-X was fabricated in Altenrhein, on a portion of Lake Constance/Bodensee belonging to Switzerland.

The aircraft’s original power was twelve air-cooled Seimens-built Bristol Jupiter radials, six pushers, six tractors. However, these tended to overheat and proved insufficient for taking the aircraft beyond an altitude of 1400 ft. A change to twelve water-cooled Curtiss Conqueror inline-12s helped matters. 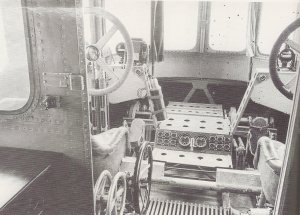 Above, the flight deck of the Do-X. Below, the flight engineer had his own engine room amidships. 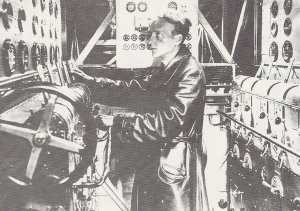 In maritime tradition, the pilot signaled for power to a separate engine room, amidships on the flight deck, where the flight engineer resided. 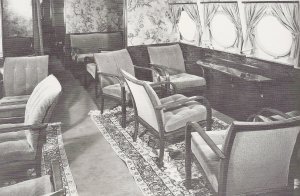 Accommodations aboard the Do-X were akin to those on an ocean liner. 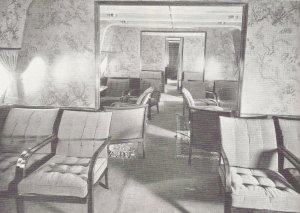 The middle deck was for passengers, with a large general area, a wet bar, a smoking lounge, a writing nook with a typewriter set in front of a window, and a dining salon—graced with a fine porcelain service designed by Dornier’s brother Marcel. 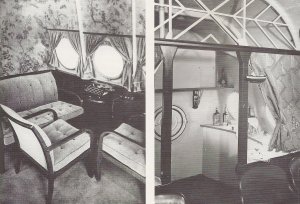 Above, the writing nook and wet bar. Below, the Marcel Dornier-designed dining service. 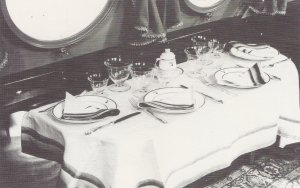 All this expansiveness was supported by logistics on the third and lowest deck. A portion of this was floatation; another was occupied by fuel tanks carrying 4227 gal. and giving the Do-X a maximum range of 1740 miles. Also cited were a maximum flight duration of 16 hours and a cruising speed of 118 mph. 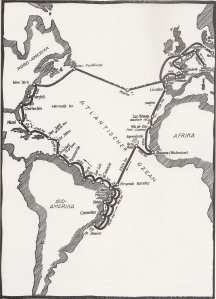 The world tour of D-1929 started in Alternhein, Switzerland, encompassed a 20,000-mile clockwise tour of Europe, Africa, South and North America and ended in Berlin. Extended stays in one place or another—they spent nine months of 1931-1932 in New York—stretched things to a total of almost 18 months. As many as 66 passengers—among them Claude Dornier—and a crew of 14 took part. 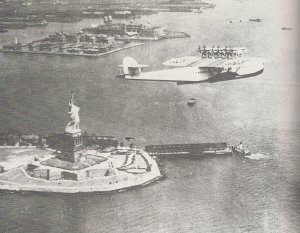 The Dornier Do-X passes the Statue of Liberty.

The world tour was not without problems. A hot exhaust ignited wing fabric in Lisbon; engine problems complicated a liftoff in Africa; its engines were overhauled during its extended stay in New York.

Turned over to the Deutsche Luft Hansa in 1932, D-1929 made a successful German tour that year. A later tour to Vienna, Budapest and Istanbul in 1933 got scratched when an over-steep setdown in Bavaria tore off the tail. This was hushed up; the aircraft was rebuilt and ended up in an aviation museum in Berlin’s main train station. D-1929 was destroyed in 1943 during an RAF air raid of Berlin.

The Italian state airline ordered two other Do-Xs, each powered by twelve Fiat V-12s. Do-X2 and Do-X3 entered service in 1931 and 1932, respectively. 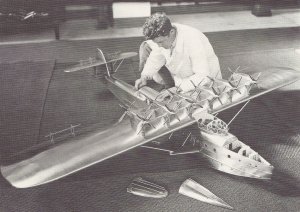 A model of the second Italian aircraft, Do-X3, rendered in duraluminum.

These two were soon commandeered by the Italian Air Force and used for prestige flights and public spectacles. Which reminds me of the flights of Air Marshal Italo Balbo, a tale for another day. ds

This entry was posted on June 27, 2013 by simanaitissays in Vintage Aero and tagged Claude Dornier, Dornier Do-X.