THE ENGINE of Bugatti’s Type 251 Formula 1 car is mounted properly aft of the driver. This engine has double overhead camshafts and its eight cylinders are fashionably oversquare, the bore larger than the stroke. The race car’s suspension, front and rear, has pushrods, rocker arms, coil springs and dampers, mounted inboard. All of these attributes wouldn’t seem out of place on today’s Grand Prix grid.

It is a Bugatti, though, and there are unorthodoxies. Neither the front nor rear suspension is independent. The engine is mounted transversely, not longitudinally. And it sports a quartet of Weber carburetors. 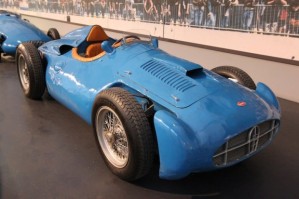 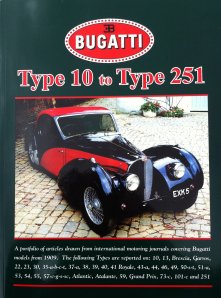 An excellent source: Bugatti Type 10 to Type 251 A Brooklands Profile, compiled by R M Clarke, Brooklands Books, 2010.  This compendium contains magazine articles from 1925 to 2009.. Both www.amazon.com and www.abebooks.com list it.

The company dabbled in luxury automobiles, revitalized French railways with Bugatti-powered locomotion and also supplied France’s military, which in the early 1950s was fighting in what used to be French Indo-China (Cambodia, Laos and Viet Nam). The French surrender at Diem Bien Phu in 1954 dried up Bugatti’s armored propulsion business, but this didn’t dispel a plan initiated a year before to bring Bugatti back into racing 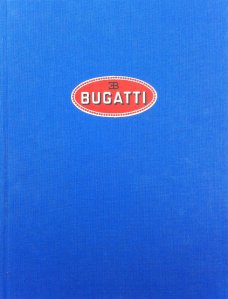 For his race car, Roland hired a fabled designer, Gioacchino Colombo, of Alfa Romeo, Ferrari and Maserati fame. The Bugatti engine was an inline-8, a kin to Colombo’s Alfa 158, one of the most successful racing engines of all time. Given the Bugatti’s transverse layout, this engine was designed as a pair of inline-4s with camshaft and output drives taken from the center of the block.

There was another reason for these mid-block drives. The all-conquering Mercedes-Benz W196 Formula 1 car of 1954-1955 had an inline-8, though conventionally longitudinal and canted. Its camshaft and output drive were likewise taken from the center; this, to lessen torsional stresses on a lengthy crankshaft.

Typical of the era, the Type 251 had a space frame of small-section steel tubes. Its de Dion rear axle (see www.wp.me/p2ETap-d4) was a fashionable choice; the Lancia D50 and Maserati 250F had this layout too. However, a traditional Bugatti hollow tubular front axle was decidedly not. 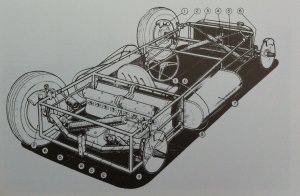 Note the Type 251’s transverse engine, essentially a pair of inline-4s. Front and rear axles are located by twin radius rods, leading at the front, trailing at the rear. This and other images from Bugatti Magnum.

Conway observes that Colombo wanted an up-to-date independent front suspension, however Roland objected. “A car without a rigid and hollow front axle would not be a Bugatti,” he reportedly said. In a sense, the result was another de Dion design: The tube was guided in the center by a pin-and-slot arrangement. Its pushrods, rocker arms and crossed inboard coil springs were as advanced as this axle was traditional. 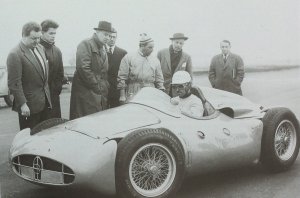 Maurice Trintignant is at the wheel of the Type 251 during testing; Roland Bugatti, at extreme left; Pierre Marco in the jaunty cap.

Again quoting Conway, “The vehicle was a disaster—it would neither hold the road nor steer.” Roland evidently had not inherited his father’s intuitive skills in unorthodox engineering.

A second Type 251 retained the tubular axle up front, but replaced the coil springs and rockers with a single transverse leaf spring. Driver Maurice Trintignant preferred this to the earlier model, though he didn’t think much of either. 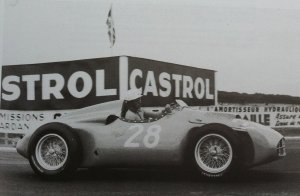 At the 1956 French Grand Prix at Reims, Trintignant did 18 laps in the earlier prototype, came into the pits with the accelerator sticking—and suggested he had had enough with such a death trap.

The Type 251 never ran again. It, another Type 251 chassis and an engine now reside in the Cité de l’Automobile (http://goo.gl/UHBsA), in Mulhouse, France, as part of the Collection Schlumpf (see www.wp.me/p2ETap-LN). ds