Here are Maque Choux tidbits gleaned from an entertaining article “This Cajun Corn Dish Screams ‘Summer,’ by Gabrielle Hamilton, in The New York Times, June 17, 2020, together with my usual Internet sleuthing. 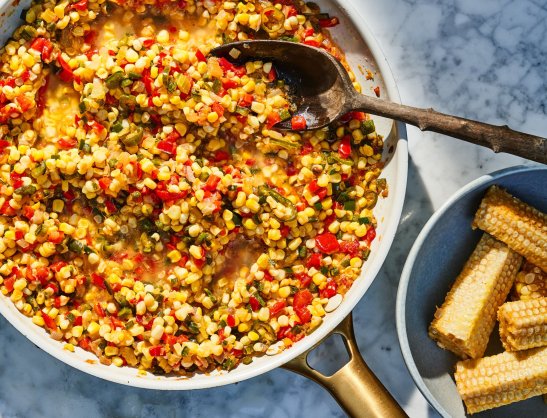 Gabrielle writes, “I’m married to a restaurant chef. A competitive chef. An efficient chef…. And the sorry fact that she no longer has a job and now does all her cheffing in our home on a comparatively miniature domestic scale doesn’t mean she has gone slack or lost her muscle. She is still 100 percent thoroughbred Chef. Which is like living in a Fisher-Price Play Family Farm with an actual 1300-pound chestnut mare.”

Gabrielle goes on to describe how an approaching-its-shelf-life red bell pepper and several cooked corn-on-the-cobs led to her Maque Choux. Upon consulting other Internet variations, my Maque Choux tones down on hot peppers, cheats with frozen corn, and is topped with shrimp.

The trick in Gabrielle’s and other Maque Choux recipes depends on having, she says, “sweated each ingredient in stages, along the way, with a final brief simmering together that resulted in a colorful, sweet, hot, juicy, milky, buttery perfection.”

A Little Bacon Never Hurts. Heat some bacon in a large skillet. (I partially freeze a pound of bacon, divide it into 1-in. chunks, and freeze the chunks in baggies for this purpose.)

Save the crispy bacon bits for mixing in at the end. Pour off all but some of the fat, and add 2 Tablespoons of butter.

Onion, Celery, and Garlic. Cut the onion and celery into small dice (about the size of a corn kernel).

Heat the butter and fat until just foaming, and sauté the onion and celery.

After a few minutes, add 1 teaspoon of minced garlic and a couple pinches of salt. Continue stirring until the mixture is softened and translucent, maybe six minutes total.

Peppers, Bell and Other. Core and seed a red bell pepper and cut it into small dice. Actually, I buy a bag of small bell peppers of various hue. Maybe four or five of them equals one large bell pepper. To this, I add a small can of Ortega mild diced green chiles, drained.

Combine peppers, together with 1 more Tablespoon of butter, into the pan. Continue stirring, with a couple more pinches of salt. In four, five minutes, the pepper pieces will become translucent.

Adding the Corn. This is where Maque Choux purists shuck perhaps three ears of corn and shave the kernels (and their milk) with a sharp knife. Me? I pour maybe 10 oz. of frozen corn from a bag in the freezer.

Add the corn and a Tablespoon slice of butter to the mixture. Stir to combine everything.

The Final Steaming/Shallow Braising. After a few tosses, this mixture starts to hiss. At this point, add 1/4 cup of water and some black pepper, and put a lid on the pan for a few minutes. This encourages the corn kernels to give off their liquid and the rest of the flavors to merge.

Gabrielle says it’s okay to peek: “You will notice a general softening and melding together. Return the lid, and let cook a few more minutes, noticing the water evaporating and the remaining liquid reducing and gaining some ‘body’ and gloss.”

I Nearly Forget My Shrimp. I like to jazz up my Maque Choux with shrimp sautéed in garlic butter. This takes only a few minutes while the Maque Choux is completing its magic melding. 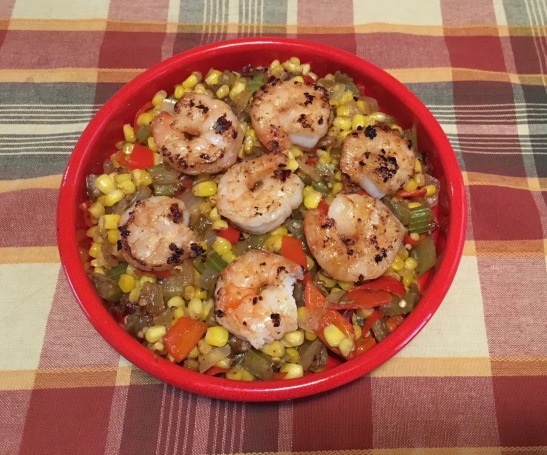 Gabrielle writes, “It should be sweet, spicy, a bit wet, and surprisingly complex given the few ingredients and their household ordinariness.”

Yep, her spouse is the professional chef, but Gabrielle has a fine sense of cuisine as well. ds