SHELTERING IN PLACE encourages wanderlust, and what more beautifully vintage means of travel than a 1935 Bowlus Road Chief? This particular example, with direct ties to the Bowlus family, was auctioned by Gooding & Company at its 2011 Scottsdale Auction. Here are tidbits gleaned from the Gooding catalog together with my usual Internet sleuthing. 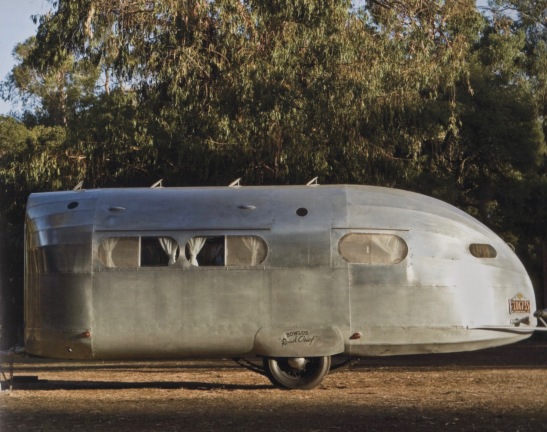 Bowlus History. The Bowlus may remind you of an Airstream; indeed, the heritage is the other way about: William Hawley Bowlus was first at building trailers, aerodynamic aluminum-bodied means of transporting sailplane gliders.

Back in the 1920s, Bowlus was a glider enthusiast and instructor. Among his students were Charles and Anne Morrow Lindbergh. In 1927, Bowlus was Superintendent of Construction of Lindbergh’s Spirit of St. Louis, built by Ryan Aircraft in San Diego, California.

In 1934, Bowlus translated this fabrication expertise into producing the Road Chief, a fully equipped travel trailer. The company, based in California’s San Fernando Valley, endured the Great Depression until 1936. Then Bowlus returned to the aircraft industry. Wikipedia says, “In 1936, Wally Byam, who founded Airstream, adopted the Road Chief design for the Airstream Clipper after working for Bowlus as a salesperson.”

A Southwestern Theme. Bowlus chose the name “Road Chief” in keeping with the company’s Southwest theme, as featured in a 1936 cover story of Trailer Travel magazine. (A copy of the issue was among the Gooding Bowlus memorabilia, which included period kitchen utensils, tableware, and a vintage radio.) The Road Chief was an upscale Bowlus; the Papoose was another.

The Road Chief offered by Gooding in 2010 carries serial number 130, the 30th produced. The catalog notes that it’s one of approximately 15 surviving examples, this one believed to have served as the Bowlus family’s travel trailer. Its restoration was undertaken by son Charles Bowlus in 1970.

The Road Chief’s refurbishing included period-appropriate Marmoleum floor covering and upholstery fabrics of cotton and linen in keeping with the Southwestern theme.

The kitchenette has an icebox, a sink with water pump, and space for a portable stove. The interior is paneled in cedar veneer and ventilated with the help of a Comfortair fan. Exterior details include Ford taillamps and period-correct turn signals. 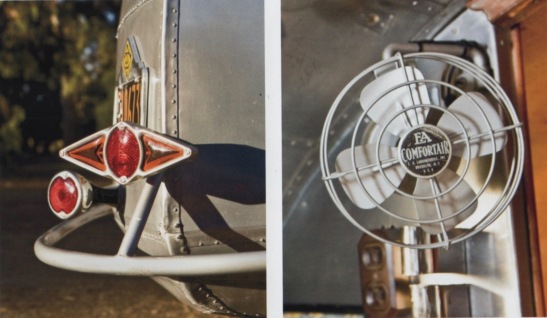 Advanced Technology. The Road Chief has a gas-welded frame and riveted monocoque bodywork. Gooding notes, “Not only were the trailers lightweight [approximately 1100 lbs] and efficiently packaged, they could actually improve gas mileage at cruising speeds!”

This aerodynamic ratio of optimal cross section-to-overall length is employed in modern studies of vehicle platooning.

The Road Chief’s front door. Below, a view aft past the kitchenette’s sink and shelving.

Latter-Day Bowlus Road Chief. Mark Vaughn brought matters up to February 3, 2016, at autoweek.com. Together with the story of Hawley Bowlus, Mark writes about decades later: “Tech entrepreneurs John and Helen Long had just sold their software company and were casting about for something to do.”

John Long “bought the company. Or at least the rights to the name ‘Bowlus.’ He brought in his daughter Geneva, fresh from Wharton School of Business, and they’ve been cranking out Bowlii ever since….”

What a great job for Geneva; what a great retirement hobby for John and Helen. ds