HENRY MAYHEW WAS A social researcher of London’s mid-nineteenth century. His works were collected in 1851 in London Labour and the London Poor, describing the working class of this largest city in the world at the time.

Mayhew was also a co-founder of Punch, the satiric English weekly that introduced comic drawings to magazines in 1843. His elaborately wrought descriptions of London life provided source material for Charles Dickens, George Bernard Shaw and other authors.

Mayhew’s work abounds with tidbits of mid-nineteenth-century London. Here’s a selection concerning edibles and their distribution, sort of a “Guide to London’s Quick Food, 1850.”

Covent Garden Costermongers. Mayhew notes, “The number of costermongers—that is to say, of those street-sellers attending the London ‘green’ and ‘fish’ markets—appears to be, from the best data at my command, now 30,000 men, women, and children.” 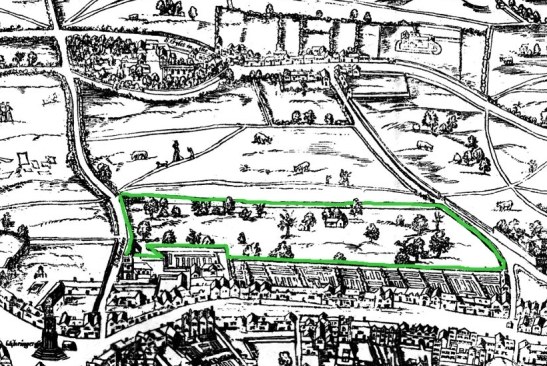 Covent Garden, on the east fringe of London’s West End, is a major tourist attraction today. This drawing of it dates from the 1560s. Its name comes from Anglo-French: a religious community.

Mayhew says, “On a Saturday—the coster’s business day—it is computed that as many as 2,000 donkey-barrows, and upwards of 3,000 women with shallows and head baskets visit this market during the forenoon. About six o’clock in the morning is the best time for viewing the wonderful restlessness of the place, for then not only is the ‘Garden’ itself all bustle and activity, but the buyers and sellers stream to and from it in all directions, filling every street in the vicinity.”

This and the following image from Mayhew’s London.

Mayhew continues, “… the steps of Covent Garden Theatre are covered with fruit and vegetables…” You can imagine too a young flower seller, with a linguistic expert and his pal lurking nearby. In fact, Eliza Doolittle and her father Alfred P. Doolittle of My Fair Lady are typical of Mayhew’s London folk.

Fried Fish. “The cry of the seller,” Mayhew writes, “is ‘fish and bread, a penny.’ For the itinerant trade, a neatly painted wooden tray, slung by a leather strap from the neck, is used: the tray is papered over generally with clean newspapers,” no doubt a precursor of today’s tradition of fish and chips served in wrapped newsprint.

Hmm… Ten shillings is half a quid. And the pound sterling in 1850 is worth something like £130 today. I wonder if 65 quid would get me into London’s fried-fish business?

Hot Green Peas. “In many parts of the country,” Mayhew says, “it is , or was, customary to have ‘scaldings of peas,’ often held as a sort of rustic feast. The peas were not shelled, but boiled in the pod, and eaten by the pod being dipped in melted butter, with a little pepper, salt, and vinegar, and then drawn through the teeth to extract the peas, the pod being thrown away.”

Tossing a Pieman. “A few years ago,” Mayhew comments, “the street pie-trade was very profitable, but it has been almost destroyed by the ‘pie-shops…’ Summer fairs and races are the best places for the piemen.”

“To ‘toss the pieman’ is a favourite pastime with the costermongers’ boys and all that class; some of whom aspire to the repute of being gourmands, and are critical of the quality of the comestible. If the pieman win the toss, he receives 1d. without giving the pie; if he lose, he hands it over for nothing. The pieman himself never ‘tosses,’ but always calls head or tail to his customer.” 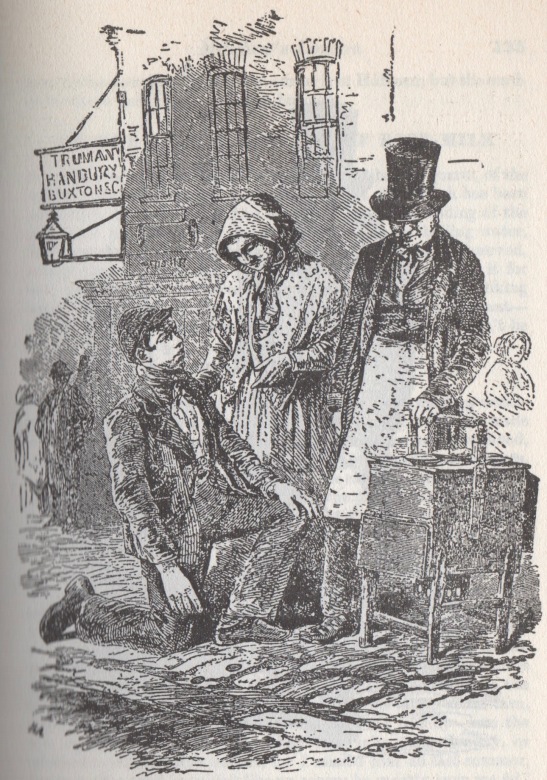 A coster boy and girl tossing the pieman.

Mayhew explains the etiquette of it all, and possibly some Brit etymology: “Very few people buy without tossing…. Gentlemen ‘out on a spree’ at the late public-houses will frequently toss when they don’t want the pies, and when they win they will amuse themselves by throwing the pies at one another…”

Do you suppose this might be the origin of the Brit taunt, “Tosser!”? I propose we go no deeper into this. ds