HAVE THERE ever been automobiles more elegant than Bugattis? I doubt it, and I offer this 1932 Type 50T as an example. The Type 50 and its variants are the products of père et fils, with Ettore Bugatti’s artful mechanicals and his son Jean’s coachwork style. They’re also the first Molsheim designs to feature engines with double overhead camshafts.

This and the following illustrations from R&T, July 1967.

Bugatti’s previous engines had single overhead camshafts, but he was impressed with technicalities of the two Miller-powered Packard Cable Specials swapped for three of his Type 43 sports cars and a ticket home by American racer Leon Duray in 1929. When the Bugatti Type 50 appeared in mid-1930, its engine had double overhead camshafts very much in the spirit of Harry Miller, whose artistry was right up there with Bugatti’s.

The Roots-type supercharger is prominent in this view from the right of the Type 50T’s 4972-cc double-overhead-cam straight-eight.

R&T observed, “As in the Miller-designed engines, the cam lobes acted upon valve cups and the two valves per cylinder were inclined at an angle of 90 degrees to each other. The hemispherical combustion chamber was machined into the cast iron integral head-block unit.”

The Type 50T, as in “Tourisme,” had an engine producing 225 hp at 4000 rpm and a 3-speed gearbox mounted integrally with the live rear axle. According to R&T, “Jean Bugatti was said to have driven it at 118 mph at the Montlhèry Autodrome.” 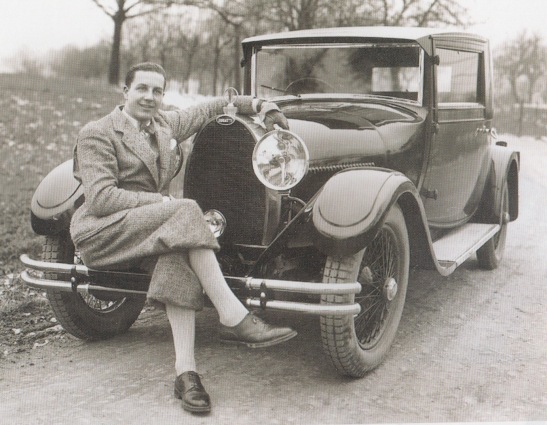 Jean Bugatti’s coachwork designs were on many Bugattis from the Type 50 onward. Alas, he was killed on August 11, 1939, in a road accident while testing the Type 57 race car that had won Le Mans that year.

“The Type 50T was Jean’s first masterpiece. The Molsheim factory appears in the background.” Caption and image from Bugatti Legend Exhibition, July 1- September 12, 1993,

The interior of the Type 50T was every bit as elegant as its exterior. Its extremely angled windscreen was in marked contrast to short upright counterparts of the era. The latter were to minimize frontal area; Jean’s solution was to optimize air flow.

Two lightweight seats and upholstered panels provided a touch of luxury. Instrumentation and controls (including one for adjusting shock absorbers) were the era’s state of the art.

The Type 50T’s chassis, on an extended wheelbase of 138 in., was traditional Bugatti. Its brakes were cable-operated, though a growing number of other marques featured hydraulic brakes by this time. Rear suspension of the Type 50T’s transaxle relied on reversed quarter-elliptic leaf springs, their shackles aft of the axle centerline. The one-piece front axle was suspended on semi-elliptic leaf springs.

An example of Ettore Bugatti’s engineering elegance, if not practicality: Front semi-elliptic springs pass through square holes in the tubular front axle. The adjustment cable for the friction shock absorber is also visible. Below, the Bugatti patent for front axle fabrication. Image from Bugatti Magnum,

To me, everything about the Type 50T is a feast for the eyes and the mind, be it innovative, traditional, or downright eccentric. ds