THE CHINESE invented the world’s first movable-type printing press around 1040 A.D., yet practical Chinese typewriting had to wait until the late 20th-century and the computer era. Indeed, there has been a fascinating interaction of these two technologies. This and related tidbits arose from my reading the London Review of Books and a usual bit of Internet sleuthing.

“The Left-Handed Kid,” by Jamie Fisher, in The London Review of Books, March 8, 2018, gives an overview of The Chinese Typewriter: A History,” Thomas S. Mullaney’s 2017 book on the topic. The LRB article’s title, “The Left-Handed Kid,” comes from Fisher’s observation that with Morse code, typewriting, braille, and word processing, “For nearly two centuries, China had been the left-handed kid in a world of right-handed scissors.” 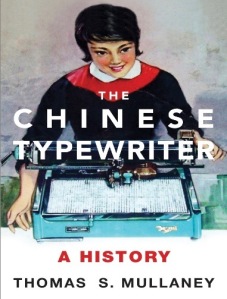 The Chinese Typewriter: A History,

A Great Many Characters. The Chinese language has more than 50,000 characters, each representing a concept, not just a sound. An educated reader of today’s official Mandarin dialect is familiar with around 8000 of them. A typical newspaper uses perhaps 2500.

It has been calculated that a knowledge of 1000 of these characters would give 89-percent comprehension. But even then, the thought of a 1000-key machine is a far cry from the West’s familiar QWERTY.

A Changing Language. LRB’s Fisher writes, “Characters tie China together both in time and in space.” And she notes that the characters also hide linguistic changes: Seventeenth-century scholars found that classical Chinese poetry no longer rhymed because sounds of this tonal language had evolved over the previous millennium.

Western Influences. More recently, Western influences of Chinese typewriting have been beneficial if perhaps more than a bit biased. “In the 1860s,” Fisher notes, “the missionary William Gamble published an influential book of selected characters in the Chinese Bible, suggesting typists might prioritize by frequency.”

In 1888, Devello Sheffield, another American missionary, invented the first machine described as a Chinese typewriter. Fisher observes, “… his goal less to create a typewriter than to replace the missionary’s intermediary, the opinionated Chinese clerk.”

Character Frequency. The Sheffield device, never mass-produced, arranged 4662 characters on a circular tray, the ones less frequently used located in remote portions of the tray. Fisher identifies a certain missionary bias: “…it is hard to image that ‘blindness,’ ‘slave,’ the characters in ‘Jesus,’ and the animals of Noah’s ark would otherwise be included.”

Later, engineer Shu Zhendong designed another typewriter exploiting location of characters based on frequency of use. Fisher says that at least 100 Shu-style typewriters were sold each year between 1917 and 1934. A fragile device, this one had metal slugs manipulated by tweezers. 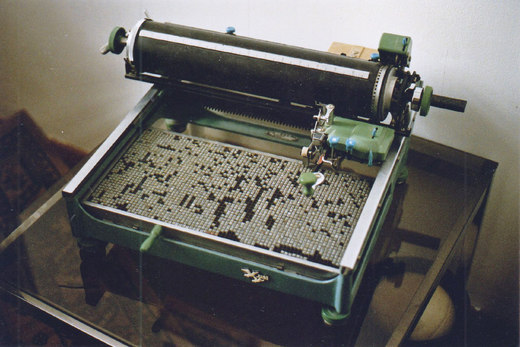 An early Chinese typewriter, with characters painstakingly assembled and then printed. Image from London Review of Books, March 8, 2018.

An Immigrant’s Lament. In researching his book, Mullaney writes that a Shu typewriter he examined had “shimmers of characters exhibiting greater reflectivity… likely because they were used more frequently.”

“This machine,” Mullaney says, “was owned by a Chinese-American immigrant. The keys that glitter with use are emigrant, far away, urgent, longing, hardship, and dream.”

Lin Yutang. Lin Yutang, 1895–1976, was a writer, translator, Harvard- and Leipzig-trained linguist, and philosopher. After decades of work, in 1946 he filed a U.S. patent for his Ming Kwai typewriter. 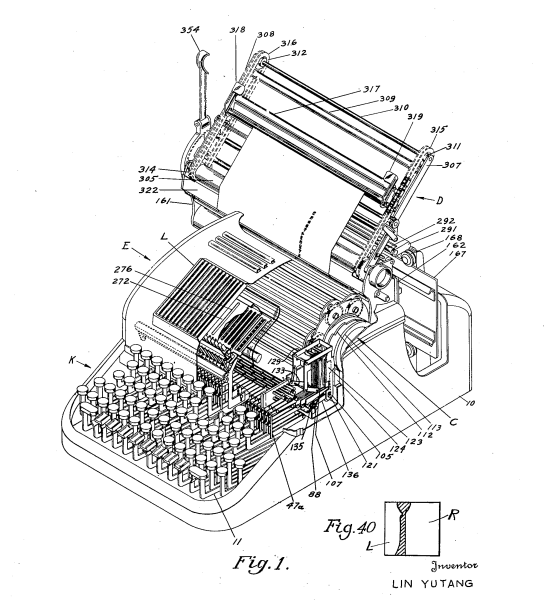 The Ming Kwai (“clean” and “quick”) was an electromechanical device with revolving drums containing the characters, viewed and amplified through a “magic eye” mounted in the center of the keyboard. This typewriter was never produced commercially.

Chinese Communist Mods. The Sapir-Whorf Hypothesis posits that structure of a language affects its speaker’s perception of the world; loosely, that language limits thought. In 1951, typesetter Zhang Jiying arranged characters in an innovative scheme that has come to be called “free-association.” As Fisher describes it, “Zhang recognized how much language is cliché. ‘Liberation’ (jiefang) was likely to be followed by ‘army’ (jun), ‘American’ (Mei) by ‘imperialism’ (di).”

Word Prediction. Though this has more than a touch of Nineteen Eighty-Four Doublespeak about it, the same sort of word prediction is used in modern Chinese computer-based typewriting and also in word processing in the West.

Notes Fisher, “Today if you open a laptop or unlock a phone to type in Chinese, the first thing you’ll notice is how intent the software is on doing all your work for you. The letters typed on your keyboard trigger the on-screen display of several dozen likely possibilities, arranged in order of frequency.”

Similarly, my computer’s word processing offers choices of English words when I type something not already in its vocabulary.

In a sense, we can thank the Chinese typewriter for both. ds