A SHARP RIGHT, THEN SET ‘ER DOWN

THESE DAYS, most commercial aircraft landings are thankfully bereft of drama. A long, straight, and gentle descent. Even St. Thomas’s relatively short 7000-ft. runway comes after a gradual straight-as-an-arrow approach that begins 50 miles to the west in Puerto Rico.

However, I can name three dramatic exceptions to this: Hong Kong’s original HKG, Kai Tak (no longer active); Madeira’s FNC, Funchal; and a seaplane approach to San Juan, Puerto Rico. I’ve experienced two of these firsthand, Madeira and San Juan; the third, only in the virtual world of Microsoft Flight Simulator. (Indeed, I’ve “piloted” all three in the sim.)

There’s a commonality of all three approaches: a sharp turn, then set ‘er down—quickly. Here are tidbits on each one.

Hong Kong Kai Tak. Kai Tak’s runway 13/31 jutted out from the airport’s terminal area on a peninsula for 11,122 ft., sufficiently long to accommodate Boeing 747s once a scary approach was carried out. Active from 1926 to 1998, Kai Tak was considered the sixth most dangerous airport in the world. It is now replaced by Chek Lop Kok, a 19-mile drive from Hong Kong.

The approach using runway 13 was world-famous: It began with a descent over Victoria Harbour and the densely populated Western Kowloon, all the while headed straight for Checkerboard Hill, an orange-and-white reference point.

Then, at precisely the correct moment, the pilot made a 47-degree right turn to line up with runway 13. Typically, this maneuver was begun at an altitude of about 650 ft. and completed at 140 ft. with touchdown only a short distance ahead. 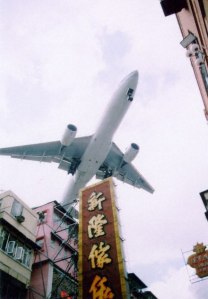 Prevailing conditions at Kai Tak made runway 13 the only acceptable choice. However, the approach was complicated by Hong Kong’s hills that could make crosswinds variable in direction and strength.

I never visited Hong Kong during my traveling days. However, wonderful 9Dragons add-on scenery for Microsoft Flight Simulator gives me opportunity to fly Kai Tak’s runway 13 approach complete with the Checkerboard’s initial target. I can do it reliably—virtually, of course—in my Miles M.57 Aerovan. But I’m sure glad for the Reset button with wide-body jets.

Madeira Funchal. Madeira is part of an archipelago located in the Atlantic 600 miles southwest of Portugal, of which it is an autonomous region. I first learned of Madeira from the English satirical duo Flanders & Swann’s “Have Some Madeira, M’Dear” and also visited there later.

Cristiano Ronaldo Madeira International, aka Funchal, is the island’s airport (Madeira’s Cristiano Ronaldo is a football star). Prior to flying there, I researched its approach (third most dangerous in the world, some say) and practiced it on my sim. Old pro that I was, I knew what to expect when I got there.

Funchal Airport is built along the Madeira coastline. Image by Mrsurrender.

The runway, aligned 05/23, hugs the coastline with a steep mountain on one side and the Atlantic on the other. Opened in 1964, Funchal’s 5249-ft. length accommodated a Lockheed Constellation, a four-engine prop flagship of TAP Air Portugal and other airlines of the era. In 1986, runway length was extended to 5905 ft., then in 2000 to today’s 9124 ft.

This last extension was built on a platform, partly over the sea, supported by 180 columns, each 230 ft. tall. In 2004, the airport received the Outstanding Structure Award bestowed by the International Association for Bridge and Structural Engineering.

Under the Funchal runway. Image by Alexander Baxevanis.

Prevailing winds dictate landing in the 05 direction, which, because of mountainous topography, requires a variation of the Kai Tak sharp right and set ‘er down. Typically, aircraft approach offshore in the 23 direction, then hang a right that heads toward the mountain, then another right to final, following navigational aids mounted halfway up the mountainside.

Piece of (Madeira) cake, once you’ve used the Reset often enough with Pedro Oliveira’s fine add-on scenery on the sim.

San Juan seaplane. Back when I lived on St. Thomas, a trip over to San Juan was a great way to experience traffic lights, a bustling city, and keeping to the right, just like stateside. One option to get to San Juan was Antilles Air Boats.

In my mind’s eye, the Grumman Goose descended west across the water toward a bunch of high rise buildings, then pulled a steeply banked Uie into the prevailing trade winds to set down in the bay.

The St. Thomas approach may not have been as spectacular, but it was no less pleasurable. ds