THE ISIS, a river renowned for its rowing and punting, flows through the English town of Oxford. When American Bill Fink was a student at Keble College, University of Oxford, he took part in rowing competitions. Indeed, today at the age of 75, he is still active with Oxford Old Boy crewing. 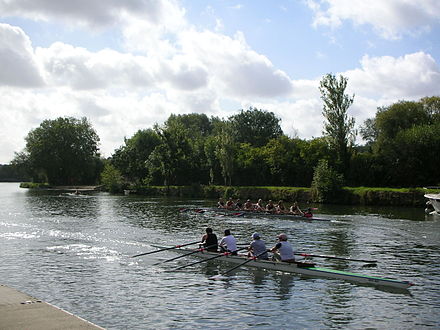 Rowing on the Isis at Oxford, England. Image uploaded to English Wikipedia by Jpbowen.

Reflected his rowing enthusiasm, when Bill established a U.S. agency for Morgan sports cars in 1968, he named it Isis Imports Ltd. Originally on Eddy Street in San Francisco, the company outgrew this location and resettled at the end of San Francisco’s Pier 33, not far from Fisherman’s Wharf. These days, Isis Imports also has a second location in Bodega, California (yes, of Alfred Hitchcock’s The Birds fame!).

The 1960s were great times for Morgan, with the U.S. its largest export market. Then came the 1969 advent of clean air and automotive emissions controls. Buying its engines from larger automakers, Morgan was hard-pressed to keep up with enhanced stringency of regulations. Its U.S. market all but died.

However, Bill was more than just an astute businessman (I suspect he’s snickering at this moniker as he reads it). He was, and remains, a Morgan enthusiast. After extensive discussions with federal authorities and scads of paperwork, beginning in 1974 Bill was able to convert new Morgan Plus 8s to propane power and renew their legal importation.

Maurice Owen, rest his soul, was the Morgan director of development and engineering. We joked at the time about his use of a state-of-the-art phone.

Maurice Owen was responsible for developing the Morgan Plus 8, whose Rover engine began life as the U.S. Buick V-8. Brit Eoin Young drove an early Plus 8 for R&T in December 1968. As R&T engineering editor, I tested other Plus 8s in August 1980 and June 1999.

Bill and his wife Judy became friends. Drives up and down the coast between Newport Beach and San Francisco’s Pier 33 were more than just pleasurable work. In fact, on a trip to Malvern Links, Worcs., the home of Morgan, Wife Dottie and I enjoyed the hospitality of Maurice and his wife.

As shown in this 1999 photo, Bill really gets into his work.

I experienced another bit of Bill’s engineering of Morgans in my drive of Isis Imports’ Chevrolet-engine Plus 8. And not just any Chevrolet engine, but a 6.0-liter LS2 Corvette V-8 producing 400 hp (versus the Rover V-8’s nominal 190) and 400 lb.-ft. of tyre-churning torque. 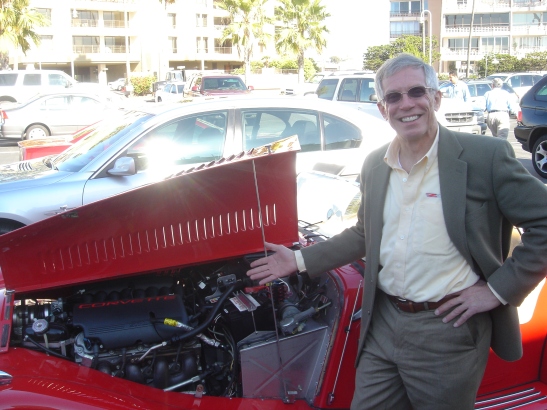 Dave Hill, Corvette chief engineer from 1992 to 2006, examines one of his company’s LS2s in an unfamiliar home.