THE R&T subhead reads, “Mercedes Continue Drive for Sports Car Domination.” Indeed, in the 1952 Mexican Road Race, Karl Kling’s 300 SL coupe finished first and Hermann Lang’s 300 SL coupe finished second. John Fitch would have joined them on the podium, had it not been for what was, in retrospect, a screwup in the fabled Mercedes team efficiency. Here are highlights from R&T.

Course map and the following images from R&T, February 1952.

One of the Gordinis broke an axle a few miles from the Tuxtla Gutierrez start at the race’s southern extremity, with more than 1900 miles to go. But after the first day, November 19, 1952, Jean Behra’s Gordini was first on elapsed time. Giovanni Bracco’s Ferrari ran second; Kling’s 300 SL, third. The three Mercedes, reports R&T, kept in “as close a Germanic precision as tire troubles would allow.” 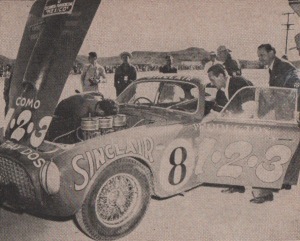 Tires, though, weren’t Mercedes’ only problem. A buzzard crashed through Kling’s SL windscreen, injured co-driver Hans Klenk, and exited taking out the rear window. At the next opportunity, buzzard bars were installed. Roger Barlow tells the tale retrospectively in Autoweek, August 31, 1987.

On day two, drivers were advised to slow down through the village of Acatlan. “Drivers slowed cautiously,” R&T reports, “but on the frantic go-ahead signals from a local policia, speeded up.” Ahead loomed curbing in the town center, into which car after car crashed after sliding on loose dirt.

In Mexico City at the end of the second day, Fitch and his 300 SL roadster were fourth and, according to R&T, “beginning to attract attention with his brilliant run.” 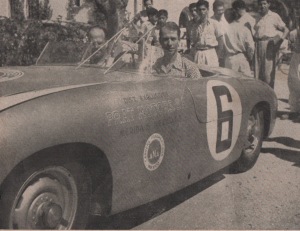 Through the third day, Mexico City to Leon, all the cars had extreme tire wear. According to R&T, Mercedes co-drivers were carving “louvres to lead air onto the rear tires…. The Mercedes fenders were badly scarred from flying treads caused by tire failures….”

Continued R&T: “In close drill—4th, 5th, and 6th—ran the Mercedes—not as brilliant on this leg,” but (remembering Le Mans) fearful.” Earlier that year, Mercedes had won Le Mans.

The fourth and five day had dramatic competition among the Ferraris of Bracco, Luigi Villoresi, and Luigi Chinetti; Umberto Maglioli’s Lancia; the Mercedes trio; and the privateer Ferraris of Jack McAfee and Phil Hill, these latter two doing well sans factory support.

On the fifth of eight legs, Leon to Durango, R&T reports, “Fitch’s Mercedes developed 1 1/2 inches of front-wheel toe-out, which was (apparently) remedied.”

On the seventh leg, Parral to Chihuahua, R&T writes, “Fitch, who had thought his front wheel alignment successful discovered it to be as bad as ever, and blew three tires.”

Then, at the Chihuahua-Juarez finish, “Juarez Airport (10 miles from town) was a swarming mass of humanity, waiting for the finishers. Reports came through that Fitch had passed Kling—and sure enough, the American came across the finish line first… only to be disqualified.”

In leaving Chihuahua, Fitch immediately sensed the “front tires were howling even at slow speeds in straight line running.” He turned back for repairs, Mercedes mechanics worked on the car—and this invoked a disqualification for “accepting outside help.”