HAVE YOU DONE AS WELL AS YOUR PARENTS?

IT IS THE hope of parents that their kids will, in some sense, do better than they’ve done. The metric might be wealth, education, status or general happiness.

Alas, according to recent research, one of these wishes isn’t coming true.

Economic aspects are discussed in “The Fading American Dream: Trends in Absolute Income Mobility Since 1940” by Raj Chetty et al in Science, April 28, 2017, the weekly magazine of the American Association for the Advancement of Science.

These researchers at Stanford University, Harvard University and the University of California, Berkeley, estimated rates of “absolute income mobility,” that is, the percentage of children who earn more than their parents. As described in their abstract, they “combined data from the U.S. Census and Current Population Survey cross sections with panel data from de-identified tax records.”

Their “cohorts” of the sample were grouped by birth year, 1940 through 1982. Then, as baselines, researchers measured income in pretax dollars at the household level when parents and children were each about 30 years old. Incomes were adjusted for inflation by the U.S. government’s Consumer Price Index.

Baseline estimates of absolute income mobility by birth cohort. This, the following graphs and insights from Science, April 28, 2017.

Of those children born in 1940, a vast majority, more than 90 percent, earned more than their parents as each reached age 30. This metric of absolute income mobility has trended downward over the years: For children born in the early 1980s, only 50-55 percent achieved this milestone by age 30.

The researchers measured robustness of their results in several ways. For example, it might be argued that kids today take longer to reach peak lifetime earnings. Changing the baseline to age 40 exhibited a similar downward trend, however.

In another sensitivity study, researchers considered the fact that kids marry and start families later these days than previously: “One widely used approach to adjusting for changes in household size is to divide family income by the square root of the number of family members in the household.”

Following this square-root approach, the trend of declining absolute income mobility wasn’t quite as pronounced. But it still existed. 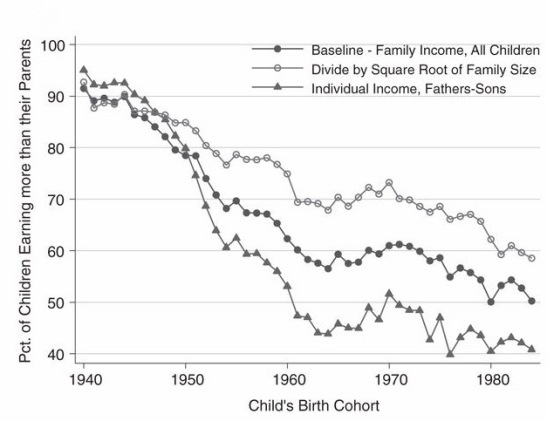 Researchers also tested the heterogeneity of results. For example, the researchers measured how absolute income mobility varied from state to state. Parents were identified by where they lived around age 30; children, by their place of birth.

Downward trends appeared in all states, though the extent of decline varied in a patchwork around the country. The upper midwest and central south generally showed the least decline, less than 35.9 percent. Among the most prominent were Alaska, Illinois, Michigan, Nevada and Washington state, each greater than 46.3 percent.

Researchers summarize, “First, children’s prospects of earning more than their parents have faded over the past half-century in the United States.… Second, most of the decline in absolute mobility is driven by the more unequal distribution of economic growth in recent decades, rather than the slowdown in GDP [Gross Domestic Product] growth rate.”

The researchers conclude, “If one wants to revive the ‘American Dream’ of high rates of absolute mobility, then one must have an interest in growth that is spread more broadly across the income distribution.” ds

One comment on “HAVE YOU DONE AS WELL AS YOUR PARENTS?”