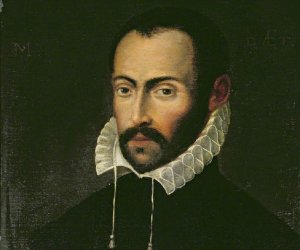 Roland de Lassus, 1532–1594, Flemish composer, one of the most influential musicians of his time.

The motet genre has never been Billboard 200 stuff, even back in the old days. Indeed, according to Johannes de Grocheio’s Ars Musicae, written c. 1300, the motet was described as “not to be celebrated in the presence of common people, because they do not notice its subtlety, nor are they delighted in hearing it, but in the presence of the educated and of those who are seeking subtleties in the arts.”

So let’s not expect Lassus jams at Mar-a-Lago any time soon. On the other hand, it’s no surprise to learn that Sherlock Holmes, the world’s greatest consulting detective, “lost himself in a monograph which he had undertaken upon the Polyphonic Motets of Lassus.”

This comes from Holmes chronicler Dr. John H. Watson in his account of “The Adventure of the Bruce-Partington Plans.” It’s a tale of submarine patents, espionage and dreaded foreigners as timely as today’s headlines.

But what of that Lassus monograph?

At the conclusion of Watson’s account, he notes it “has since been printed for private circulation, and is said by experts to be the last word upon the subject.”

Hmm. The New Annotated Sherlock Holmes cites a differing view from Sherlockian scholar Benjamin Grosbayne: “As for being ‘the last word upon the subject,’ the enthusiasms of friendship must be taken into consideration. Tovey, Koechlin, Jeppesen, Mattieu, Bäumker, Sandberger, E. Van de Straeten and other authorities make no mention of Holmes’s monograph.” 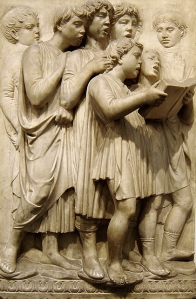 A panel of the Cantoria, the organ loft of the Cathedral of Florence, c. 1435, by sculptor Luca della Robbia. Image by Ricardo André Frantz, 2006.

On the other hand, the mere mention of “polyphonic motets” rankles those familiar with the genre. It’s tantamount to saying “unpolished garage band” or “train wreck Justin Bieber.” A motet’s interplay of vocal parts makes it polyphonic by definition. Surely Holmes would have known this.

As is typical in such Canonical squabbles, some Sherlockians pin the rap on Watson. No doubt, they claim, Holmes had left an explanatory note for his chronicling colleague: “motets (polyphonic),” which Watson juxtaposed redundantly as “polyphonic motets.”

To this day, the squabble itself is polyphonic. ds