I’VE HAD a good time here discussing con men such as Pierre Arnold Bernard, aka Oom the Magnificent; Wolfgang von Kempelen and The Turk chess-playing automaton; and Donald J. Trump, with The Art of the Deal and Trump University.

Not to appear mysogynistic, today I offer tidbits on a trio of con women.

Barbara Erni managed to avoid being captured in art throughout her life, though a Golden Boos nickname arose from her red-blond hair. 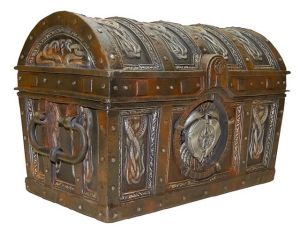 A trunk such as this might have been used by Barbara Erni, aka the Golden Boos, 1743–1785, Liechtenstein-born con woman. Image from peashooter85.tumblr.com. See also tips.fm for details.

The Golden Boos would travel with a large wooden chest. Staying overnight at an inn or farmhouse, she’d say that the chest was filled with treasure and demand that it be kept in a most secure location. The next morning, guess what, the chest would be missing, along with whatever valuables the mark possessed in this most secure space.

The scam was a simple one: Inside the chest resided an accomplice of small stature. When all were asleep, he’d extract himself, gather the host’s valuables and the chest, and disappear into the night.

This scheme worked at least 17 times. Then Barbara and, one assumes, the little guy were caught in Eschen, Liechtenstein, and imprisoned at Vaduz on May 27, 1784. Though Liechtenstein was something of a Sanctuary Principality at the time, the court decided that the Golden Boos be made an example.

On February 26, 1785, before a crowd of more than a thousand people, Barbara Erni was beheaded. She was to be the last person executed in Liechtenstein, which finally got around to abolishing the death penalty in 1987. Her legacy includes Golden Boos Lane, in Eschen, Liechtenstein.

Mary Willcocks was a straightforward imposter, but with real style. On April 3, 1817, she appeared in Almondsbury, Gloucestershire, England, wearing exotic clothes and speaking an incomprehensible language. Reflecting judicial tolerance of the time, the woman was charged with vagrancy and jailed.

Mary Willcocks Baker, aka Princess Caraboo, 1791–1864, English servant and more. This and another image from mentalfloss.com.

While in prison, she encountered a Portuguese sailor who claimed he spoke her language and shared a bizarre tale: The young woman was really Princess Caraboo from the island of Javasu in the Indian Ocean. The poor thing had been captured by pirates, arrg!, who eventually sailed into the Bristol Channel. There, she jumped overboard and swam to safety.

Upon release from stir, Princess Caraboo was remanded to the local magistrate, Samuel Worral, and his family. She demonstrated ability with a bow and arrow, knew how to fence, swam naked and prayed to Allah-Talla, all of which confirmed her tale. 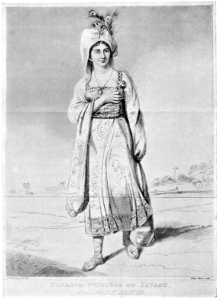 Princess Caraboo. From an engraving by Henry Meyer, 1908, after a picture by Edward Bird.

Princess Caraboo’s story was corroborated by several authorities, including a Dr. Wilkinson who identified her language. Magistrate Worral proposed to investors a Javasu spice deal facilitated by the princess. Her picture appeared in British newspapers.

This queered the con. A boarding house keeper saw her picture in the Bristol Journal and recognized the princess as Mary Willcocks, a cobbler’s daughter from Devon.

Undaunted by the revelation, Worral and Mary continued to exploit the princess bit, absent any lucrative Javasu deals. He paid her way to the U.S. where Princess Caraboo played Philadelphia, to little success. A tough house, Philadelphia, even for a princess.

Princess Caraboo/Mary returned to England, maybe attempting other gigs in France or Spain. On September 13, 1817, there was a writeup in the Bristol Journal linking her with Napoleon, exiled on St. Helena at the time. Apparently he was so fascinated, he petitioned the Pope for dispensation to marry her.

Mary eventually did marry, to a fellow named Richard Baker in 1828. They had a daughter the following year. Mary died in 1864.

As shown in the 1994 flick Princess Caraboo, you just can’t keep a good con woman down.

Bertha Heyman’s scam was to assume the role of a rich European widow unable to access her fortune. (See also the Spanish Prisoner dating back to the late 16th century. Nigerian officials: Take note for possible future use.) 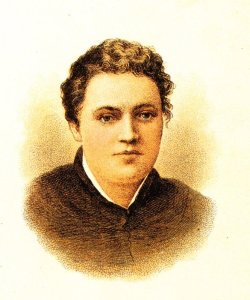 Eager to help were Bertha’s wealthy American marks, wishing to get their hands on the money, not to say on Bertha as well. The New York City police called her “the boldest and most expert of the many female adventuresses who infest the country.”

Her scam recurs on today’s Internet: “I have this fortune tied up, but need some feed money to access it. There’s wealth for you in it if you help….” Several hundred dollars here, $250 and two gold watches there, then $1460 from a pair of guys. Bertha was caught often, but never deterred. While in stir, she befriended a fellow and conned him out of $900.

Bertha had a heart of gold, sort of: “The moment I discover a man’s a fool I let him drop, but I delight in getting into the confidence of men who think they can’t be ‘skinned.’ It ministers to my intellectual pride.”